Shotaro Akaboshi is an immature, obsessive watch collector, in the Toei Yu-Gi-Oh! anime.

Shotaro steals the rare D-Shock watch that Yugi Mutou got for Hiroto Honda, as Honda was going to buy it for Miho Nosaka. 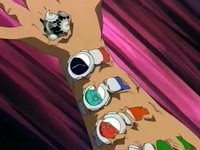 Dark Yugi comes to get it back, challenging him to a Game of Darkness, in which the players have to stop the watch after letting it run as long as they can before a pendulum swings down. Despite losing his first game against Yugi fairly, Shotaro demands a do-over, thinking that he will have an advantage if he plays from the opposite side, which Yugi accepts. His attempt to stop the watch fails because of his not taking account of the pendulum returning from the opposite side, and he is cut on his hand as result. Despite having lost twice fairly, Shotaro refuses to acknowledge his loss, and tries to snatch the watch anyway. At this point Dark Yugi gives him a Penalty Game, making him think he's made out of clock parts. Some time later, Shotaro returns home and silently destroys his entire watch collection, with his mother desperately begging him to tell her what happened to him.