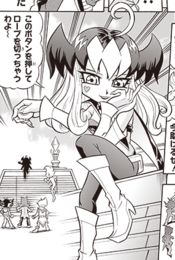 Sindy as she appears in D Team ZEXAL.

Sindy is a fair-skinned girl, with long tri-colored hair that is mostly blonde and curly, but becomes purple and bat wings-shaped over the head with two violet highlights (a cowlick and bangs made of three overlappling lozenges); squared eyes with green iris, and a fang on the left side of the mouth.

Her attire is quite provocant, wearing only a skimpy white-lined red croptop with a large collar over her torso, as well as light blue diamond-shaped earrings, a blue choker, white detached sleeves, blue skin-tight pants, and white heeled knee-high boots. She additionally sports some makeup, like brigh pink eyeshadow and lipstick, a red heart tattoo on her right cheek, and purple polish over her sharpened nails.

The first syllables of Sindy's first and last names sound like the word "Synchro" when combined, referencing her Deck type.

During the opening of the Duel Team Carnival, someone hacked the Obots, causing a huge riot. The members of Team ZEXAL found the building where the hacker was and went after him.[1] After defeating Fusion Mask, the guardian of the first Web Point[2], they reached the top of the building, where they found Sindy, the guardian of the second Web Point, holding Shark's friends as hostages, suspended by ropes. Sindy and Shark then Dueled, with the rule that each 1000 Life Points Shark lost would make one of the 4 ropes holding his friends be severed. Sindy managed to reduce Shark's Life Points to 300 using her quick Synchro Summons, but was ultimately defeated by Shark's "Number C101: Silent Honor DARK". Upon Sindy's loss, Master Evil appeared, disappointed that Sindy failed him; she begged him not to punish her, but the ground under her elevated and formed a kind of rocket, and Evil sent her flying away.[3]