Roman Goodwin, known as Rudger Goodwin (ルドガー・ゴドウィン, Rudogā Godowin) in the Japanese version, is a character from the Yu-Gi-Oh! 5D's manga and initially the main antagonist. He is the brother of Rex Goodwin and also goes by the alter ego, the Skeleton Knight (骸骨騎士, Gaikotsu Kishi), a being from an urban legend.

When a Duelist claps their cards together at sunset, the Skeleton Knight is said to appear and give them rare cards.[1] However, this is a trap; the cards that they are given, the "Duel Dragon" cards, eventually take over and corrupt them, making them loyal minions to Roman. Roman's ultimate plan is to conduce the Festival of Duality along with his brother, Rex Goodwin; however, unlike Rex, who desires the power of the Ultimate God, Roman's goal is to free Rex from the control of the Ultimate God's dark miasma and save him.

Roman was originally a nameless boy living on the Ican streets with his brother, 5000 years before the events of the manga. He and his brother were caught stealing food, but they were saved by Ish Kiq Goodwin, who took them home and adopted them, serving as their foster sister and mother and gave them their names: Roman and Rex Goodwin. Roman and Rex grew to respect Ish for her superior skills as a Duel Priestess, and Roman eventually developed apparent feelings for her.[2]

Roman rushed home one day to see Ish dressed in her new clothes for the Festival of Duality, having been chosen as the Duel Priestess. But tragedy struck when Ish fell victim to the ritual. Her wish had been for Rex and Roman to train as Duel Priests, and after the answers that the village council gave the brothers didn't satisfy them, they decided to conduct the Festival themselves. Roman had heard legends of the Ultimate God granting a single wish to at the end of the ritual, which they planned to use to revive Ish.

Years later, the brothers, now the high Priests of the Northern and Southern Skies, were finally ready to enact their plans. Roman had doubts about involving the the current Duel Priestess in their plans, but Rex chastised him for getting cold feet. Their plan succeeded, and Roman traversed the Corridor of the Northern Sky in the Aerial Fortress Seibal. Seeing a Shadow Miasma gathering in the Machine Temple at the center, he realized that it was the sealed power of the Ultimate God and wondered if they could truly control it. He then saw Rex fighting Ish, both of them under the influence of the Shadow Miasma. Rex gained an advantage and prepared to stab her with the lance that Roman would later wield himself, but Roman threw himself in the way of the lance, and both of them were impaled. Ish returned to normal after Roman confessed that he loved her, begging him to save Rex, who too had fallen prey to the Ultimate God's darkness.[2] 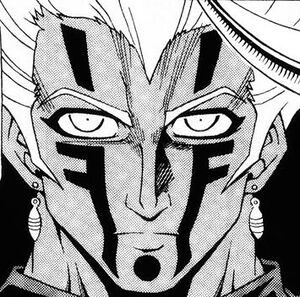 After Sect Ijuin lost to Yusei Fudo in a factory in Satellite, he held his cards up to the sunset, clasped them together and prayed for cards to help him beat Yusei.[1] Roman, in the form of the Skeleton Knight, appeared on an altar which had not been there before and took Sect captive. Yusei demanded that he give Sect back, but the skeleton challenged Yusei to a Duel.[1] He is defeated when Yusei breaks the pipe he was running along, causing him to get disqualified for stopping. After losing, he starts to disappear, but asks Yusei his name before totally vanishing.[3]

While Sect is in the hospital, he appears to him in a dream. According to the ancient edicts, the knight says that he shall grant Sect's wish. When Sect wakes-up, he finds himself holding a card: A Level 8 Monster Card, named Archfiend Dragon Beelze".[4]

The Skeleton Knight later appears behind Yusei whilst he is Turbo Dueling against Hunter Pace, as one of his servants, Sect was currently being infected by one of his dark cards, which Yusei along with the other Duel Priest reincarnations could feel.[5] 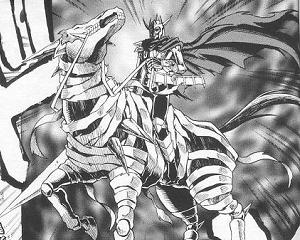 The Skeleton Knight on his horse

During Sect and Jack Atlas's Duel, the Skeleton Knight interrupts the Duel by bursting out of the ocean on his altar and salvaging Sect before he lost to Jack. He then reveals that he and Sect are involved within an evil, dark cult known as the Skeleton Knight's Crusade, which consist of several Duelists who wished for cards from the Skeleton Knight. These members all follow his commands and consider the Signers their enemies. He then disappears with Sect, leaving Yusei and Jack shocked at the events that just occurred.[6]

Skeleton Knights's plans are later revealed to involve the "Ultimate God", which he plans to resurrect in the Aerial Fortress Seibal.[7]

Meeting Rex Goodwin inside the Duel Gate, both discuss their past and how they failed to complete the Festival of Duality years ago but now they will finish it today. After summoning their respective representatives Sect and Akiza, the Skeleton Knight proceeds to watch the duel between them.[8] When Sect summons "Beelzeus of the Diabolic Dragons" in the climax of his duel, the Knight congratulates him for mastering the powers of darkness and tells him to rise to the pinnacle of darkness. Following Sect's victory over Akiza, the Knight leaves with Sect into the Aerial Fortress Seibal.[9]

Encountering Yusei in the Northern Sky Corridor, The Skeleton Knight explains to Yusei about what happened to Sect and Akiza and what he must do in order to reach them. Noting that he lost the last time they met, the Knight makes sure that it won't happen the same way again.[10] Yusei is eventually able to defeat "Underworld Dragon Dragonecro" and the Skeleton Knight complimented him on his growth, wondering if Sect's situation had drawn out his power.[11] He decided to unleash his full power, bringing out "Underworld Flood Dragon Dragocutos" and almost defeating Yusei, but Yusei was able to hold on with "Stardust Spark Dragon."[12] The Skeleton Knight ended his turn, poised to win on his next turn with the effect of "Dragocutos," but Yusei was able to defeat him by combining "Stardust's" effect with "Phoenix Battle Wings." Impressed by Yusei, claiming that he was indeed the warrior that he'd recognized, the Skeleton Knight took his loss gratefully.[2] Afterwards, Yusei asked the Knight what he'd seen in his memories. Roman revealed his name and his history with Ish and Rex, and begged Yusei to save Rex if Jack could not. The Machine Temple began to collapse, and Roman mused that it had been worth waiting 5000 years for a warrior like Yusei. Roman died in the wreckage, content with the knowledge that he had passed on Ish's last request to the next warrior and reunited with Ish's spirit at last.[13]

Roman uses a "Hellfire" Deck focused on his "Duel Dragon", "Underworld Dragon Dragonecro". He also utilizes several cards to protect it, such as "Hellfire Veil" and "Spectral Ice Floe".