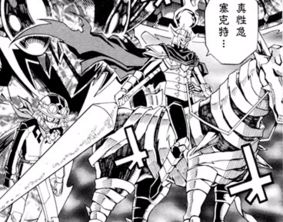 The Skeleton Knight's Crusade is a group of dark Duelists who use a "Shadow Sense".