Skill (スキル, Sukiru) is a special rule characteristic of Speed Duels, which are featured in Yu-Gi-Oh! Duel Links, the Yu-Gi-Oh! VRAINS anime, and as a variant of the Yu-Gi-Oh! Trading Card Game.

In the anime, it is also possible to use a Skill during a Master Duel under certain circumstances, the specifics of which are currently unknown, as shown when Bohman and Windy used Storm Access during their respective Master Duels with Playmaker and Varis. 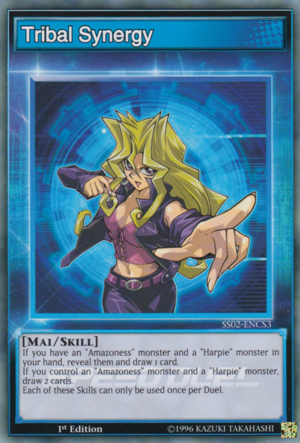 In Yu-Gi-Oh! Trading Card Game Speed Duels, Skills are represented by Skill Cards. Each player can include one Skill Card with their Deck, which is set aside face-down at the start of the Duel. When the Skill Card is activated, it is turned face-up. 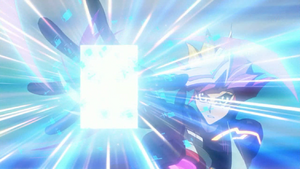 In Yu-Gi-Oh! VRAINS, Skills are special effects that each player can use only once per Duel. They may possess a number of effects, like improving a draw, increasing one's LP or enhancing a monster's ATK.[1] They can be used during either player's turn.[2] Skills appear to be procedurally generated, though rather than being generated randomly like they would be in real-world video games, they appear to be generated to fit a Duelist's Deck and/or Dueling style. As seen with Playmaker and Varis, Skills are not necessarily unique to their users, and multiple Duelists can share a given Skill. As seen with the Gore and Skye Zaizen a Duelist may utilize different Skills between different Decks.

If two or more Duelists combine their LINK VRAINS avatars into one and play a Duel as that combined avatar, their avatar will have access to each of those players' Skills during that Duel and can use each Skill once. This technically enables a single Duelist within that Duel to use multiple Skills, beyond the normal "once per Duel" limit. (This is because the game considers each player to be using their own individual Skill once per Duel.) For example, Bit and Boot were able to use Marker's Portal twice during their Duel with Soulburner, since their avatars were combined into BitBoot.[3]

Skills can be hacked to do previously unheard-of abilities, such as the Double Draw Skill used by Number 10.

In Yu-Gi-Oh! Duel Links, each character can use up to one Skill with their Deck. The Skills that can be used depend on the character—each character has a unique pool of Skills, but some Skills are available to multiple different characters.

Skills provide some effect during the Duel. Certain Skills can create monsters or change one card into another. (Monsters played to the field by Skills are treated as having been properly Special Summoned.) Along with the game's Forbidden and Limited lists, Skill effects are subject to change to maintain balance.

Non-player characters normally do not use Skills, but they occasionally do during special events. Additionally, Jaden/Yubel's Level 40 Deck at the Gate includes the Skill "Neo-Spacian Onslaught".

Skills can be obtained in a variety of ways:

Each character has 3 level-up Skills, one of which may be obtained when the character in unlocked (listed as a Level 1 reward).

Each character has a set of several drop Skills. They are primarily obtained as random drops when defeating Legendary Duelists (originally the only way to obtain them) or Dueling in Ranked Duels. These are the only Skills that can be obtained using Skill Chips or Skill Tickets. Originally, it was possible obtain Skills the player already has as drops, but they would be automatically converted into Gems (originally always 15 Gems, but later 5, 10 or 15 Gems at random); in the current version of the game, this is no longer possible.

This is a list of Skills that players can obtain for their characters (Skills that are exclusive to non-player opponents are not listed).

Differences between the anime and Duel Links[edit]

In the anime, if the use of a certain Skill would cause a certain effect to meet its activation requirement, that effect can be activated normally after the Skill has finished being applied. For example, discarding "Trickstar Mandrake" in order to use her "Trickstar Fraud" Skill allowed Skye Zaizen to activate Mandrake's Trigger Effect afterward.