Skipjack, known as Nanami Maguro ( Maguro Nanami) in Japanese, is a character in the Yu-Gi-Oh! SEVENS anime. He is the captain of the Goha Fishing Elementary ship and a Fisherman Duelist.[1] 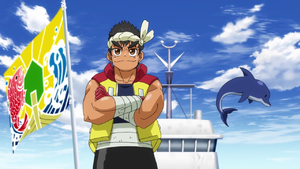 Skipjack after the timeskip.

Skipjack is a tanned and muscular boy with brown eyes and short black hair. His eyebrows are shaped like tuna. Appropriately for his school, he wears a combination of swimwear and water safety gear; a skintight navy blue rash shirt and skintight black swim shorts covered with bandages wrapped around his torso, a yellow and red life jacket, red gloves, bandages wrapped around his wrists to keep his gloves watertight, and black water shoes.

Skipjack is by his own admission not very intelligent, but he is passionate about fishing and the ocean. Skipjack also greatly enjoys Dueling; he is ecstatic upon being defeated by Yuga despite the situation he found himself in. He is easily angered by the notion of polluting the ocean and the insinuation that Yuga might have done so drives him to Duel Yuga before the situation could be clarified. However, Skipjack believes that a person's true nature is revealed when they are in a pinch and judges Yuga properly then. When he realizes his error, Skipjack apologizes to Yuga and generously takes him back to the shore. Skipjack tends to use the word "tuna" at the end of his sentences and also tends to use stereotypical nautical terms, such as "sending people to Davy Jones' Locker".

Skipjack's fishing skills allowed him to become the captain of the Goha Fishing Elementary, during which time he visited several ports and Dueled other Duelists there to hone his skills. After Rush Duels were created, Skipjack quickly became skilled at them, as their swift play time allowed him to have several Duels at the same port.[1]

After setting sail from Goha City on Goha Fishing Elementary for a month-long trip around the world, Skipjack came on deck to find five stowaways; Yuga Ohdo, Luke, Romin Kassidy, Gavin Sogetsu, and their drone Kaizo. Skipjack informed them the ship would not return to the city for another month, and learned that they had boarded by mistake. The ship's nets then caught a strange humanoid object, which Yuga recognized as one of his Roads, prompting Skipjack to angrily accuse him of pollution and vow to defeat him in a Rush Duel. Skipjack gained an early lead with "Big Umi" and "Bait Bite Ball" despite Yuga's use of the WATER "Hydro Magician". As his fellow students cheered him on, Skipjack Tribute Summoned "Hydro Cannon Big Bluefin" and used its effect to allow his other monsters to attack Yuga directly, intending to finish him off that turn. Yuga however was able to restore enough LP to survive the attack, though he remained in a pinch due to another "Bait Bite Ball" Skipjack had Set, a situation Skipjack believed would reveal the truth about Yuga's intentions. Yuga was able to return Skipjack's Trap Card to his hand, then weaken all of his monsters with "Lightning Voltcondor", allowing him to defeat Skipjack. Despite his loss, Skipjack was ecstatic over how much fun the Duel had been and he admitted Yuga didn't seem the type to pollute the ocean. Yuga explained he wasn't sure why his Road had been in the sea and then learned that it contained the data of Kaizo, who had been replaced with a fake. Skipjack explained that the island the fake Kaizo had directed Yuga and his friends towards did not exist, and the fake Kaizo then departed. Though he was unsure what had happened, Skipjack realized that the Road was one of Yuga's friends and he apologized for treating it like trash and offered to take them back to the shore. Skipjack drove Yuga and his friends back on a speedboat, then returned to the Goha Fishing Elementary after dropping them off, suggesting they Rush Duel sometime in the future.[1]

Skipjack uses a Fish Deck, which is based around building and maintaining efficient advantage over his opponent. His Field Spell "Big Umi" reduces the ATK of all non-WATER monsters and allows him to activate several of his card effects. Skipjack's ace monster, "Hydro Cannon Big Bluefin", allows his low-ATK monsters to attack directly. His Deck is noted to be "eco-friendly"; he uses his "Rotation" to continuously recycle his Trap Cards to maintain his advantage over his opponent.