Skull Knight, known in Japan as Skull Bishop, is the first of the five Duelists of Death, whom Axel Brodie Duels in an effort to free a rebellious village. 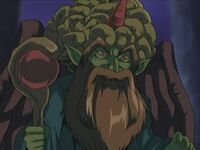 He and other Duelists of Death are first seen as spectators during The Supreme King's Duel with Jim Crocodile Cook. Skull Knight later infiltrated a village disguised as Ancient Brain, alongside Guardian of the Labyrinth and fought Axel when he exposed him. Skull Knight was eventually defeated. During Axel's infiltration of The Supreme King's lair alongside Zane Truesdale and Aster Phoenix, their cover is blown when they tell Chaos Sorcerer that they are delivering Skull Knight's report to The Supreme King. Chaos Sorcerer initially appears to fall for this, only for him to attack Axel and reveal that all of Skull Knight's reports are to go through him first before making it to the King, so the infiltration is exposed.

Skull Knight plays a "Lycanthrope" Deck, which focuses on dealing damage with the effect of the Deck's cornerstone card, "Lycanthrope", by gathering Normal Monsters in the Graveyard in order to bolster the aforementioned ability.