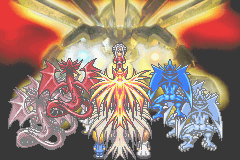 Maximillion Pegasus, under the name Sol Chevalsky, turned the Egyptian God cards into stone in order to give their power to Reshef the Dark Being. The Egyptian Gods were absorbed into Reshef, where they became orbs inside his body. The player, Yugi Muto and Joey Wheeler tried to collect the Millennium Items in an attempt to regain the power of the Egyptian Gods and defeat Sol Chevalsky, preventing Reshef from gaining its power.