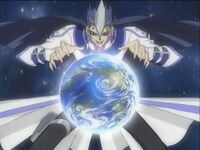 The Society of Light (光の結社, Hikari no Kessha) is a cult in Yu-Gi-Oh! GX, led by Sartorius, who was influenced by the Light of Destruction (破滅の光, Hametsu no Hikari). They serve as the central antagonists of the series' second arc, intent on the planet's destruction. 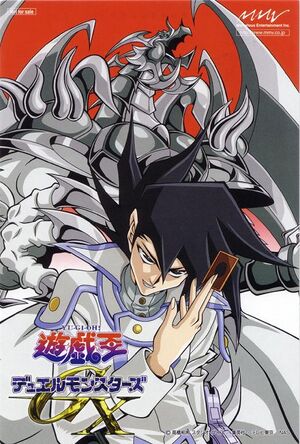 Chazz Princeton, in his "White" Uniform. Behind him is "Armed Dragon LV10", affected by the "White Veil" Spell Card.

The attire for members of the Society of Light is similar to that of the Obelisk Blue uniform for males and females. The only difference is the alteration in colors from royal blue and white design to white and lavender design.

On the surface, the agenda of Sartorius and his organization appears to be world domination starting with Duel Academy by expanding their syndicate, but Sartorius evidently wishes to put his stalled fate back into motion through the powers of Jaden and Aster. His ultimate goal is to put an end to the "age of darkness" by destroying the planet to restore balance to its imperfect state, and create the world or on a greater scale, the universe anew. Members are brainwashed into the Society's fold by losing to Sartorius or one of his representatives in a Duel, using Sartorius' own mystical powers of fate-prediction and his talent for pushing an opponent's buttons to make them lose faith in their own lives and convince them that joining the Society is a much more preferable alternative.

Duelists reined into the Society in this manner are usually very devoted to its goals and have a deep obsession with the color white because of the fact that they were brainwashed upon their defeat. Essentially, the truth of their obedience is clouded behind the Society, Sartorius, and the lies they are told; they often reject outright or even forget parts of their pre-Society past the more they're in it and ex-members often can't remember anything that they did in the Society beyond the Duel that forced them into it after they're broken free. Only those with incredibly strong wills or those under the influence of outside forces can escape the Society's hold and at its basic level Sartorius' mind control is not necessarily absolute; with some Duelists, aspects of their old personalities can shine through on occasion although this can be rectified should Sartorius exercise more strength in using his powers. The signature card used by the highest ranking members is "White Veil", which represents their belief in the "light of truth." Upon joining, most members become openly obnoxious and arrogant, convinced that their force is unstoppable and that Society members are more important.

Shortly after the second year begins, Chazz is defeated by Sartorius and coerced into joining the organization. From then on, he serves as means of converting the top Obelisk Blue students and by episode 70 most of have been defeated and have "seen the light." In protest, Alexis Duels with Chazz only to become a member herself upon her loss.

During the field trip to Domino City Sartorius confronts Seto Kaiba and requests the use of KaibaLand. Once his request is granted, Jaden and Aster are lured into the virtual world by his sister, Sarina. Upon learning of their victory, Sartorius suddenly becomes more interested in leading them towards their respective dooms. As his sister alludes (states explicitly in the Japanese version), the universe's threat lies in the Wheel of Fate (Wheel of Fortune), a metaphor for both Sartorius' destiny and the weapon of mass destruction he would later obtain.

In episode 82, Chazz begins recruiting top students of Ra Yellow for the Society of Light which leads Bastion to challenge Sartorius to a Duel. Sartorius sends Chazz in place of himself and Bastion allows himself to be defeated in order to become a member of the organization. Two episodes later, under Sartorius' request, Chancellor Sheppard invites Prince Ojin of the Misgarth kingdom to participate in the Genex Tournament. Sartorius thus acquires the control switch for the most dangerous mind-control satellite known to the world (S.O.R.A. in the Japanese version; ソーラ, Sōra), along with the two keys for its activation by defeating him in a Duel. To prevent his evil side from instigating world destruction, Sartorius approaches Jaden and Aster and gives them the keys. In response, his evil personality assigns more Dueling assassins to win the keys back but is unsuccessful.

In episode 97, Pegasus reveals the origins of the Society of Light. In the dark recesses of space, several hundreds of millions of years ago, a white hole released the dark matter of a black hole as well as a great energy known as the Surge of Light (光の波動, Hikari no Hadō), which bombarded the Earth throughout the course of history, propagating wars, disasters, crimes, and dictatorships. The "Ultimate D-Card" created by Aster's father was corrupted by such energy and caused both Sartorius and Pro League king, The D, to develop split personalities. Because of its infectious properties that rival the powers of the Egyptian God Cards and Sacred Beast Cards, as well as his concern that Aster will be harmed should it ever arrive in his hands, Pegasus wishes to seal the card away before it brings an end to the world.

In episode 100 Aster breaks into Obelisk Blue looking for Sartorius and finds him waiting in the Society of Light's private Duel field, the Great White Temple (ホワイト大神殿, Howaito Dai Shinden). Intending to keep his promise of saving Sartorius from his destiny of becoming a destroyer, Aster considers relinquishing his key to Misgarth's satellite but is persuaded by Jaden to do otherwise. Recognizing the present Sartorius as an impostor posing as his dearest friend, he wagers the key in a Duel but despite help from Sartorius Good personality The Light of Destruction unleashes "Arcana Force EX - The Light Ruler" to end the Duel.

Following Aster's defeat Jaden takes his place to determine the fate of the world by Dueling Sartorius. While the battle is taking place, Chazz successfully reverts all of the Society of Light's members back to their former selves with the assistance of a group of Obelisk Blue students thereby releasing Duel Academy from the Society's grip. Having obtained both keys due to a blunder on Jaden's part, Sartorius takes complete control of Ojin and orders him to the fire the mind-control satellite. Although it does cause some damage to the planet's surface, Sarina hacks into the satellite's programming to disable it allowing both "Elemental Hero Neos" and Tyranno Hassleberry to destroy the satellite. Shortly afterward, Jaden defeats Sartorius and the portion of The Light of Destruction possessing Sartorius is sealed away forever.

The Light Brigade, known as the Four Monarchs in the Japanese version, is a group of assassins in Sarina's service. All four members Decks are centered around a "Monarch".