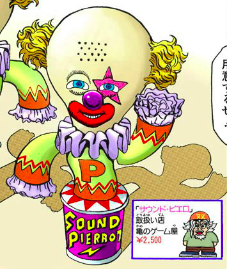 The Sound Pierrot is a toy, sold at the Kame Game, retailing at ¥2500.

Pierrot is a clown character archetype from French pantomime. The toy features a Pierrot doll standing on a cylinder. When a sound is made near the toy, the Pierrot starts dancing.

Dark Yugi used two of these toys in a silence game Shadow Game with Sozoji. The two of them sat at opposites ends of a table, each with a doll in front of them. The player to make their doll dance, loses. Sozoji noticed that when Yugi removed his headphones, the jack landed on the rim of a glass. If the jack were to fall, it would make a noise and cause Yugi to lose. Sozoji got excited waiting for the jack to fall, which caused his heart to start pounding. However Sozoji had carelessly held his microphone next to him. The sound of his heartbeat, amplified by the speakers, caused enough noise to make his Sound Pierrot dance. Yugi inflicted the Penalty Game, "Beat Festival" on Sozoji for losing.