Spartan City is a city in Italy in theYu-Gi-Oh! ZEXAL anime. Its name comes from Sparta, an ancient Greek city-state which was home to the legendary Spartan warriors, while its location and the presence of a Colosseum reference the similar culture of Rome. 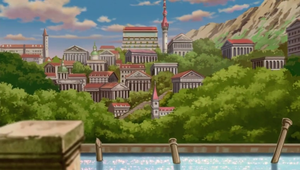 Another view of Spartan City

Nistro and Dextra grew up as orphans in this city, with Duel Monsters being their only shred of hope. In search of a Mythyrian "Number", Yuma and his friends arrived in this city to learn of a Duel tournament that Nistro is participating in, with Dextra serving as his manager. There, they learned that a "Mythyrian Number" was hidden underneath a lake. The city also has a large arena, where the Pro Duelist Spartancity Tournament was held which concluded in Nistro's victory.[1][2]