From Yugipedia
Jump to: navigation, search
This article is about the device. For the card, see Sphere Field (card).

A Sphere Field (スフィア・フィールド Sufia Fīrudo) is a special arena made of an enormous energy ball that originates from the alternative dimensions in the Yu-Gi-Oh! ZEXAL anime. It is a simulation of the environment of parallel worlds with various sorts of coloration, and is used either to encase "Number" cards or grant various abilities to those who Duel within them.

When Yuma Tsukumo opened the gate to the Astral World, a miniature Sphere Field encasing the "Numbers" appeared, trapping Yuma. It then glowed and suddenly disappeared, hereby spreading the other fifty "Numbers" across the Human World.[1] 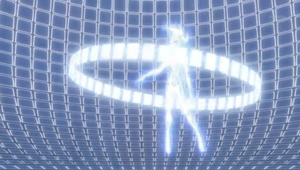 Astral within a Sphere Field, recalling his memories.

Astral can generate his own natural Sphere Field.[2] Astral did so when recalling the memories he acquired from the fifty collected "Numbers" inside the Emperor's Key.[2]

Dr. Faker designed his own Sphere Field and began construction of it five years prior to the World Duel Carnival, assisted by Byron Arclight.[3] Upon its completion, Faker used it to absorb the energy of the "Numbers". It was utilized in combination with the powers of Hart Tenjo to attack the Astral World.[4] 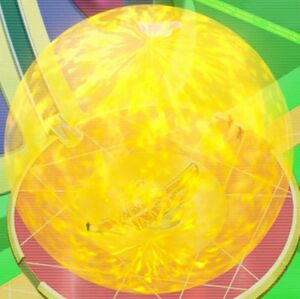 Sphere Field on top of the Duel Tower

During the final match of World Duel Carnival, the Sphere Field was generated on top of the Duel Tower for the Duel between Yuma and Vetrix, allowing Faker to gather more energy from the "Numbers" they use. It was treated as a card, which allowed both players to randomly Xyz Summon "Numbers" by using two monsters in their hands of the same Level as Xyz Materials.[3] Later on, after Yuma defeated Vetrix, it reacted and revealed its final effect which was to take away all the "Numbers" from their holder and to absorb the Duelists themselves once the Duel was concluded. Yuma used "ZW - Lightning Blade" to anchor himself and Vetrix in place to prevent this from happening, but Vetrix sacrificed himself to release the souls of his victims. The Sphere Field then teleported itself to the basement of Heartland Tower.[5] 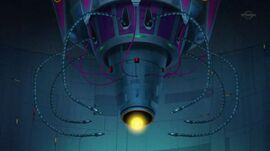 The Sphere Field Cannon (スフィア・フィールド砲 Sufia Fīrudo Hō) is a machine created by Dr. Faker to destroy the Astral World, located below Heartland Tower. After the finals of the World Duel Carnival ended, the Sphere Field moved to the cannon, destroying Heartland Tower in the process. A slot within it allows for Hart to integrate with it, with his powers being used with the "Numbers" to power it, using Astral and Yuma as bullets to completely destroy the Astral World. It can launch trash directly into the Astral World via a portal.[6] After the conclusion of the Duel between Yuma, Shark and Kite against Faker, the cannon was destroyed when the room collapsed.[7] 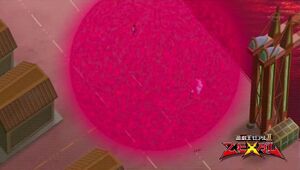 In order to acquire the "Numbers", Barians developed Sphere Cubes which generate a red Sphere Field, allowing them to gather "Numbers" themselves. Dumon gave three of them to Mizar, one for himself and two for Girag and Alito.[2] The Sphere Cube projects a Sphere Field in order for the Barians to show their true Barian form as they cannot show it in a low-energy world such as the Earth and such must retain their human form.[8] 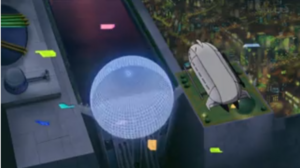 With the bracelets developed by Quinton, the Arclight Family are capable of creating a Sphere Field as Quinton and Trey did so when they combined the power of their bracelets.[9] This Sphere Field appears to be similar to Astral's version, but was deployed with the intent of trapping Dumon and Marin within its confines to prevent them from pursuing Kite and Yuma.