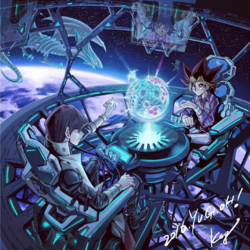 Spherium (スフィアリウム Sufiariumu) is a sphere-type fighting game, invented by Yugi Mutou. It appeared in an illustration, Kazuki Takahashi posted on Instagram, depicting a possible future, following the events of Yu-Gi-Oh! The Dark Side of Dimensions.[1]

Spherium uses monsters from the Duel Monsters game. It is played on a sphere, uses honeycomb-grid mapping and needle markers. When played by Yugi Mutou and Seto Kaiba in space, projections of their Duel Monsters, "Dark Magician" and "Blue-Eyes White Dragon", appeared over planet Earth, relative to their positions on the sphere.[1]

Four years after graduating high school, Yugi won a world game contest, entering Spherium. The game is given a high valuation and was developed in collaboration with KaibaCorp. After completion of the Spherium II prototype, Yugi and Kaiba commenced their battle, playing the game in space.[1]