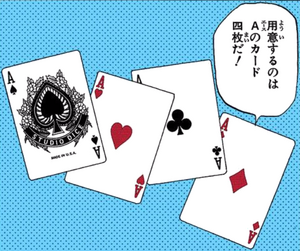 The aces from a deck of standard playing cards

Standard playing cards or the French deck is a deck of 52 cards (or more if jokers are included).

A deck contains four suits; two red; hearts (♥) and diamonds (♦) and two black; clubs (♣) and spades (♠). Each suit has thirteen cards; an ace, the numbers 2 to 10 and the face cards; jack, queen and king. The deck can be used for a variety of different games.

In Yu-Gi-Oh! series, the following games have been played:

Yugi Muto once made a card tower using these cards.[1]

In around 1998, a set of Yu-Gi-Oh! Playing Cards were produced by Angel Playing Cards which featured artworks of cards and characters from the Toei anime series.

Another set of Yu-Gi-Oh! Playing Cards, based on the NAS anime series, was later produced by Aquarius Entertainment Merchandising.