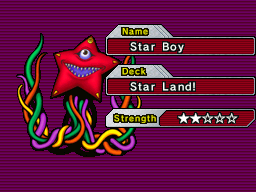 Star Boy appears as an opponent and obtainable partner. By beating him a few times, he can be unlocked for the player's use. He can be found at the north side of Duel Academy and at the Dried Well after defeating Jinzo.

Star Boy's ability as a spirit increases the amount of packs restocked in the store each Wednesday. The amount increases as the spirit is levelled up.