Stardust Dragon was designed by Kazuki Takahashi with the intention of a dragon that could "strike a pose"; rather than a traditional Western or Eastern motif, "Stardust" was given a physique similar to the average American comic superhero, which Takahashi admitted could be seen as antropomorphic.

Stardust Dragon is a lanky dragon with a humanoid body plan. Stardust has a predominantly white-skinned head that is unusually proportioned, with short jaws in comparison to its large crest and long neck. The crest and neck both have blue, ribbed sections of skin. The crest on Stardust's head is four-pointed, with a fork-like trio of points extending from the back, and a single shorter point running down its nose. Stardust has yellow eyes and a pointed, purple tongue. Its torso is largely light blue, with translucent purple pectorals and shoulder armor, and with a white-skinned tail that is patterned like its neck. Its tail is tipped with four small, axe-like blades arranged in a cross.

Stardust's wings have claws and ribbed sections of blue skin protruding along the ridge of the wing finger, which extends far father than the other fingers. The membranes are folded and crinkled in appearance, and there are two sets of wing fingers; one set closer to the body, and one closer to the end. Stardust's limbs are all white until the second-lowest joints (the elbow and the ankle), where the skin becomes light blue. The toes have ribbed blue sections near the base, while the fingers have purple knuckles before the claws.

Stardust Dragon was eventually made into a Duel Monsters card intended to function as a control unit for the control towers of the Old Ener-D reactor. After deciding that their research was too dangerous, Dr. Fudo shut the project down and implanted the Signer Dragon control cards. Roman Goodwin reclaimed the cards and taunted Dr. Fudo with them, but Dr. Fudo was able to reclaim three of the cards, including "Stardust Dragon", which he gave to Rex Goodwin. Goodwin kept the cards until he became the Director of Sector Security and a member of Iliaster, and he eventually released the three cards to the public.

The "Stardust Dragon" card eventually ended up in the hands of Yusei Fudo, one of the Signers. It became a symbol of hope for Yusei and his friends that they would one day escape Satellite. Unfortunately, Iliaster had become aware that the cards had resurfaced, and they instructed Jack Atlas, who owned "Red Dragon Archfiend" and they knew was a Signer, to steal "Stardust" and go to New Domino City. Jack did so, betraying Yusei and causing a deep grudge between them. 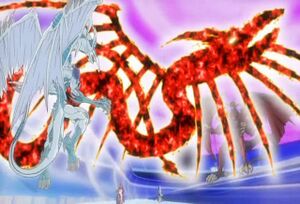 Stardust Dragon and Red Dragon Archfiend are separated by the Crimson Dragon.

Two years later, Yusei managed to make it to New Domino City, intending to reclaim "Stardust". Jack returned it to Yusei, but Yusei insisted on Dueling Jack for the card. Jack subsequently used both "Stardust" and "Red Dragon Archfiend" against Yusei, and Yusei was able to gain control over "Stardust". When the two Signer Dragons battled, Yusei and Jack's Marks began glowing, and the Crimson Dragon was partially summoned, ending the Duel prematurely before Yusei could win. 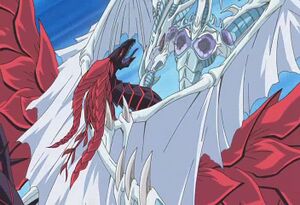 Jack later returned "Stardust Dragon" to Yusei before the Fortune Cup. Yusei left the card out of his Deck, intending to save it for his Duel against Jack, but he added it to his Deck for his Duel with newly-revealed Signer Akiza Izinski. Yusei Summoned "Stardust" in order to combat Akiza's Signer Dragon, "Black Rose Dragon", and he used "Stardust" to prevent "Black Rose Dragon" from using its destruction effect in combination with Akiza's dangerous psychic powers, while also having "Stardust" physically block the debris from the attacks.

Yusei brought out "Stardust Dragon" during his Turbo Duel with Kalin Kessler, using it to destroy the Dark Synchro Monster "One Hundred-Eyed Dragon". Kalin retaliated with his "Earthbound Immortal", "Ccapac Apu", which attacked directly. Yusei attempted to have "Stardust" block the attack, but "Stardust" phased right through "Ccapac Apu", and Yusei was only saved from losing when his Duel Runner was damaged. 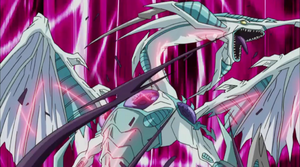 Stardust Dragon is weakened by the effect of "Thorn of Malice".

Faced with "Earthbound Immortal Uru," Yusei Summoned "Stardust Dragon" with the intention of attacking Roman Goodwin rather than "Uru", forcing Roman to deflect the attack and replace himself with Rally. Yusei would Summon "Stardust" in a similar manner in his rematch with Kalin, where it became the target of "Ccapac Apu's" attacks in order to protect Yusei's LP. Yusei's desire to save Kalin caused the Crimson Dragon to transfer the five marks to him, allowing Yusei to evolve "Stardust Dragon" into "Majestic Star Dragon" and destroy "Ccapac Apu", defeating Kalin. Yusei also used "Stardust" in his second Duel with Roman, battling "Uru" once again after Summoning it via "Starlight Road".

Yusei Summoned "Stardust Dragon" during the final Duel with Goodwin; Synchro Summoning it after Goodwin had forced both Jack and Crow Hogan out of the Duel with the effect of "Earthbound Immortal Wiraqocha Rasca". "Stardust" successfully countered the deadly effect of "Sun Dragon Inti", and was eventually evolved into "Majestic Star Dragon" again after the Signers regained control over their Marks; destroying both "Wiraqocha Rasca", and then serving as a medium for the Crimson Dragon to gain physical form to destroy the King of the Netherworld.

Yusei Summoned "Stardust" to combat Ghost's "Meklord Emperor Wisel", but "Wisel" absorbed "Stardust" with its ability and used its strength against Yusei. Yusei was only barely able to reclaim "Stardust" and evolve it into "Majestic Star Dragon" to destroy "Wisel" and defeat Ghost. He briefly Synchro Summoned "Stardust Dragon" during a Duel with Rudolph Heitmann in order to Summon multiple low-Level monsters with "Variety Comes Out". When Boss attempted to get revenge on Yusei while he was Turbo Dueling Sherry LeBlanc, Akiza played Yusei's "Stardust Dragon" card when he Summoned it, materializing it with her psychic powers and allowing it to catch oncoming debris.

"Stardust Dragon" was stolen from its card by Paradox when he challenged Yusei to a Turbo Duel. Paradox subsequently used "Stardust Dragon" to wreak havoc across time; attacking Jaden Yuki in Venice with it and overpowering him until Yusei arrived, having traveled back in time with the aid of the Crimson Dragon. Paradox also used "Stardust Dragon" to destroy the Domino City plaza and kill most of the people there, including Maximillion Pegasus and Solomon Muto, but this future was prevented when Yusei and Jaden took Yugi Muto with them to half an hour before Paradox attacked, where they engaged him in a Duel. 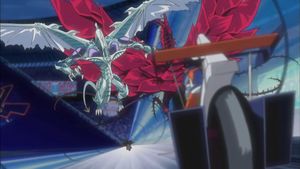 During the first match of the WRGP against Team Unicorn, who Yusei had previously Summoned "Stardust Dragon" against, Yusei gave "Stardust" to Akiza to use during the Turbo Duel. Akiza Synchro Summoned both "Stardust" and "Black Rose", and despite her loss she was able to keep "Stardust" on the field for Yusei to use. Although it was destroyed early into the match, Yusei later revived "Stardust" against Jean, fusing it with "Junk Warrior" into "Dragon Knight Draco-Equiste".

Yusei used "Stardust" against Primo, the true controller of "Meklord Emperor Wisel", and continually avoided Primo's attempts to absorb "Stardust" with the intention to evolve "Stardust" into his recently acquired Accel Synchro Monster, but Primo's words threw him off and "Stardust" was absorbed again. Eventually reclaiming it, Yusei refused to let Primo steal "Stardust" away again, and he successfully used it to Accel Synchro Summon "Shooting Star Dragon", which devastated "Wisel" and defeated Primo.

Yusei also quickly Summoned and evolved "Stardust Dragon" during his Turbo Duel with Antinomy. During Yusei's Duel with Z-one, he did not use "Stardust Dragon" until its climax; Synchro Summoning it via the effect of "Converging Wishes" after "Shooting Star Dragon" was destroyed by Z-one's "Sephylon, the Ultimate Timelord", and empowering it with the ATK of the Dragon-Type Synchro Monsters in his Graveyard, causing "Stardust" to grow to a massive size. Empowered with the feelings of people from across the planet, "Stardust Dragon" systematically destroyed the shield of "Timelords" that protected "Sephylon", defeating Z-one. 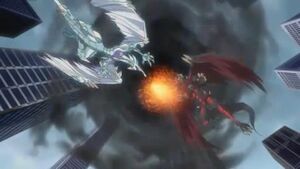 Stardust Dragon and Red Dragon Archfiend are removed from play by "Star Excursion".

Yusei swiftly Synchro Summoned "Stardust Dragon" to once again clash with Jack's "Red Dragon Archfiend" during their Duel to decide their futures, and he symbolically sends them into the future with the effect of "Star Excursion". The two Signer Dragons return after three turns, and Yusei and Jack evolve them into their Cosmic Synchro Monster forms.