From Yugipedia
Jump to: navigation, search
For other versions of this character, see Striker Crossit (disambiguation).

Striker Crossit, known as Kakeru Kunitachi in the Japanese and Italian versions, is a character appearing in the Yu-Gi-Oh! ZEXAL anime. He is a participant in the World Duel Carnival and Yuma's first opponent. He kicks around a soccer ball covered in Duel Monsters cards. In the dub, he speaks with a British accent.

Striker is the third son of the infamous Soccer Family and is expected to play soccer like his older brothers, Dempsey and Donovan. However, despite his great skills, he had little trust in others. During a soccer game, Striker ignored his teammates and tried to win on his own. His brothers disapproved of this and Striker quit soccer. After that, he discovered Duel Monsters and began striving to become Duel Champion to overcome his brothers' shadows.

Striker is seen with all of the participating Duelists as the World Duel Carnival is under way. To decide who his first opponent would be, he kicked a soccer ball and whoever it hit would decide who he would Duel. The ball hits Yuma Tsukumo and after introductions were out of the way, the two began to Duel.[1] 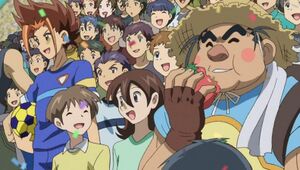 Striker watches the finals of the WDC.

During his Duel with Yuma, Striker was ruthless in attacking Yuma. Though Yuma kept proclaiming that he and his monsters would win because they work together, something Striker failed to see before. After losing to Yuma, Striker realized the importance of teamwork and surrendered his Heart Piece to Yuma.[2]

Striker is next seen with his older brothers among the spectators during Yuma's Duel with Vetrix in the final match.[3]

Striker plays a Soccer Deck revolving around his Field Spell Card, "Stadium of Dreams", and with support for his Xyz Monster, "Playmaker".