Strings is a Legendary Duelist in Yu-Gi-Oh! Duel Links. He cannot be unlocked, appearing only as an opponent. This is a video game depiction of Strings, a character from the Yu-Gi-Oh! anime.

He is not voiced, speaking only in ellipses.

Strings appears in Duel World (DM) as a special opponent with the Deck "Divine Trial" once the player has finished the tutorials. He will be available at all times for duels until the player defeats him, at which point the player obtains "Slifer the Sky Dragon" and Strings no longer appears, with Gravekeeper Ishizu appearing in his place instead. Before the Duel, Marik speaks through him, rather than allowing Strings to speak. 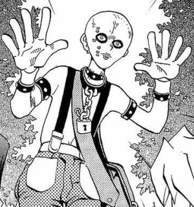 Strings in the Yu-Gi-Oh! manga