The Structure Deck "Theme" Poll 2020 (ストラクチャーデッキ「テーマ」投票企画２０２０)[1] was a poll conducted in 2020 to determine what the theme should be for an upcoming OCG Structure Deck in Japan. Voters could choose between 10 different themes, and the 2 top voted would get their own Structure Decks.[2]

Voting was conducted on the Yu-Gi-Oh! Official Card Database and required a Konami ID with an associated CARD GAME ID. 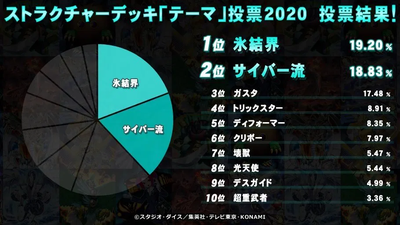 The first and second place themes, "Ice Barrier" and "Cyber Style", received their Structure Decks in November 2020 and May 2021, as promised.

The sixth-place theme, "Kuriboh", had five anime-original monsters and one anime-original Spell released in Animation Chronicle 2021. It also received one new monster as the V Jump August 2021 promotional card.