The Duel was an artificial Shadow Game, where the loser suffered the virtual reality equivalent of the "Experience of Death" Penalty Game. The game was used as a means of forcing Yugi Mutou to take part in Death-T and claiming Sugoroku's "Blue-Eyes White Dragon" card.

Seto Kaiba was humiliated from losing to Yugi before in a Duel before, so he created the Death-T theme park within his Kaiba Land theme park as a means of getting revenge.

Kaiba kidnapped Sugoroku, threatening to kill his grandson Yugi if he did not co-operate.

At the Kaiba Land grand opening, Sugoroku was put in a Battle Box, where he was to Duel Kaiba in front of a large audience. Yugi who had come to the opening as a special guest ran over to try and talk with Sugoroku, but the glass was soundproof and they couldn't hear each other.

Sugoroku thought that by having "Blue-Eyes White Dragon" in his Deck, he was guaranteed to win by just drawing it. 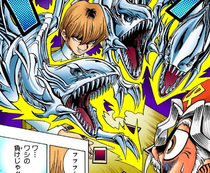 Over the next few turns, Kaiba played a monster which attacked and destroyed one of Sugoroku's, causing him to lose 300 Life Points and putting Kaiba in the lead. 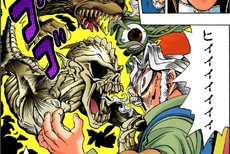 Kaiba inflicted the artificial "Experience of Death" Penalty Game on Sugoroku, causing him to be attacked by Solid Vision monsters, including Doppel-ganger. Yugi demanded that Sugoroku be let out. Kaiba laughed and informed Yugi that having done human experiments, he concluded that the average person goes insane after about ten minutes and if Yugi wants the simulation to stop, he must swear to face Death-T.