Summoned Skull, known as Demon's Summon in the Japanese version, is a character version of the card "Summoned Skull". 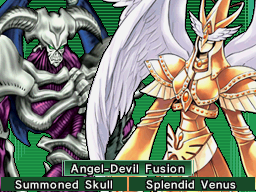 Summoned Skull appears as a Tag Duel opponent, partnered with Splendid Venus as the Angel-Devil Fusion Tag Team. They are unlocked after the player wins in 5 Tag Tournaments.