Sun Shadow (, Hikage) is a participant in the Arc League Championship in the Yu-Gi-Oh! ARC-V anime.

"Sun Shadow" is a direct translation of his Japanese name Hikage. This is in contrast to his brother Moon Shadow's name (Tsukikage), as evidenced further by the sun insignia on his forehead.

During the Battle Royal, he and his brother, Moon Shadow, initially stayed in the Jungle Area. Declan Akaba hired him and Moon Shadow to keep Celina safe from the Fusion Dimension in hopes that she would join their cause.

Sun Shadow saved Celina and Zuzu Boyle from the Obelisk Force by using a smoke bomb to stun them.[2]

Sun and Moon Shadow saved Shay from being captured by Sora Perse. Sun Shadow stalled Sora with a Duel, while Moon Shadow took the chance to lead Shay and Celina to safety. Sun Shadow lost and was sealed into a card as a result.[3]

Moon has been trying to free Sun ever since he was sealed away and challenged Sora after he appeared in the Synchro Dimension.[4] 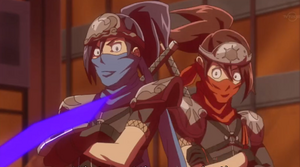 After Z-ARC's defeat and the Standard Dimension being reborn into the "Pendulum Dimension", Sun Shadow was freed from his card, but had lost his memories of Zuzu and the events involving people from other dimensions. He appeared next to Moon Shadow when the latter was reminding Yuya, Gong, and Sylvio of their past.[5] He is later seen watching Yuya's Duel against Jack Atlas with Moon Shadow[6] and applauded when Yuya won. He then watched Yuya and Declan's Action Duel.[7] He was happy when Yuya won the Duel and witnessed Zuzu's revival.[8]