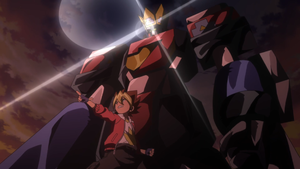 The Super Rush Robot (スーパーラッシュロボ Sūpā Rasshu Robo), also later known as the Rush Duel Robot is one of Yuga Ohdo's conceptual "Roads". After seeing it in a dream, he theorizes that it may be "the key to a new world" that Otes has told him to find in order to become the King of Duels.[1]

It is eventually revealed to be the physical data of the Rush Duel program in the Goha Duel Server, carved into the moon's surface.[2] Following its uninstallation and subsequent destruction, Nail Saionji reconstructs the Rush Duel program within a new Super Rush Robot composed from satellite debris.[3] 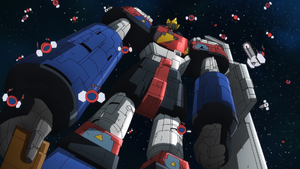 The Super Rush Robot is a titanic white, red and blue robot, similarly colored to a Duel Disk. Its shoulders and knees are printed with what appear to be card zones, and it has been shown to use an oversized Duel Disk and similarly oversized Duel Monsters cards. Its appearance has varied between Yuga's dreams; in its first appearance it had a cylindrical body with card zones printed on its chest and hips, red forearms, and a red "crown" stamped with card zones, but when it appears during the dream that inspires Yuga to create it, it has a more cubic torso with a large number "7" stamped on it, blue forearms, and a golden crown with triangular tips as opposed to half-hexagons.[4] Its intended purpose was unclear, but it was depicted as capable of carrying people on its torso to watch the spectacle. Yuga has stated that he intends to use Kaizo as part of the Super Rush Robot; first as a cooling system in the robot's groin, and later as a deodorizer in the robot's posterior.[4]

The initial physical appearance of the Super Rush Robot saw it carved from the lunar surface of the moon, lying flat on its back.[2] Following its destruction by Goha Enterprises Drones and the subsequent reinstallation of Rush Dueling, Nail Saionji had Goha Enterprises Drones construct the Super Rush Robot out of leftover satellite parts and space debris.[3] During the Goha 6 Siblings arc, the Super Rush Robot is affixed with Forced Gymnastics Armaments that force its joints to continuously move in stretches; these armaments glow red while passively active, yellow while being controlled in non-repetitive manners, and green when deactivated.[5] The robot is capable of moving on its own accord for unknown reasons, doing so to reattach its right arm, which contains the data on Maximum Summoning after the arm was shaken lose during Yuga's Duel with Yuo Goha.[6]

Yuga dreamed of the Super Rush Robot while he was trying to install Rush Dueling.[4] He later dreamed of the robot again during his challenge set by Nail Saionji, and decided that it might be the key to a new world that Otes had told him to find, so he began conceptualizing and planning it.[1] 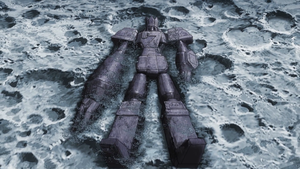 The Rush Duel program in the form of the Super Rush Robot on the moon.

Unbeknownst to Yuga, his installation of Rush Dueling had affected the Goha Duel Server carved into the surface of the moon, creating a sculpture of the Super Rush Robot that stored the data of Rush Dueling. During the Goha Rush Duel Team Battle Royal a program was launched to slowly erode the Rush Duel Program by controlling Goha Enterprises Drones that progressed for every Rush Duel played during the tournament, effectively uninstalling Rush Dueling. The program was intended to take effect during the final Duel of the tournament, and Otes became widely suspected as the culprit. Yuga discovered this after Nail defeated Braun Honya and Yuga spotted Kamome Tere's Hubbel Space Binoculars, getting the idea to look at the moon as he believed they were being distracted during the tournament by the actions of Goha 66 underground.[2] Despite the impending destruction of the Rush Duel program, Yuga and Nail worked to reinstall Rush Dueling during Yuga's Duel with Luke using Real-Time Duel Programming and succeeded after Luke defeated Yuga. Nail constructed the new Super Rush Robot out of satellite parts and space debris, creating a much more robust program that the Goha Enterprises Drones could not erode.[3]

The Super Rush Robot is seen again when it is revealed that Yuga's Original Duel Development Road is destroying the main Goha Duel Server from the excess weight placed on it from the new Duel programs. Since the Super Rush Robot is not physically connected to the server, it is not directly in danger, but the destruction of the Duel Server would also erase Rush Duels due to being directly derived from Goha Duels.[10]

When Otes' true plan of destroying Duels is revealed, Yuga, Luke, Gavin, Romin, Roa, Asana, and Nail head into space using the Mutsuba Proto-Spaceship RUSH in order to permanently disable the Goha Drones on the moon and defeat Otes in a Rush Duel. Once in space, the rocket docks with the Super Rush Robot, revealing it to have both a cockpit area and jet thrusters to act as a real Dueling robot. Using the Goha Siblings' headpieces to activate the Forced Gymnastics Armaments again, the group pilots the robot towards Otes in his Otes Robot for a final Rush Duel.[11]

Over the course of the Duel, the Super Rush Robot is severely damaged due to the strain of moving and from attacks by the Otes Robot hurling lunar debris. By the end, Yuga uses the last of the robot's strength to grab the Otes Robot, pushing the two to the speed of light as the Rush Duel concludes. The Super Rush Robot crumbles away shortly after, deleting Rush Duels from the Goha Duel Server along with it.[12]