Super Strawberry is a character in the Toei Yu-Gi-Oh! anime. She was originally Miho Nosaka's Digital Pet, but was raised by Hiroto Honda for her. 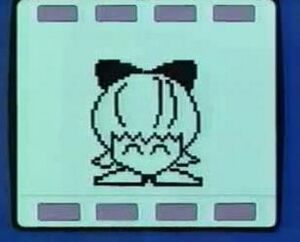 Super Strawberry, when she was under Miho's care

Miho originally owned the Digital Pet. At this time it took after her in appearance. A few days before a tournament with a prize trip to Australia, Miho mentioned that she wanted to win. However she said she didn't have time to train it herself and hoped there was someone who could do it for her. She said this within earshot Honda and mentioned that the trip was for two. Eager to impress Miho and go on the holiday with her, Honda vowed to train the pet.[1]

Honda took time off school and spent sleepless nights training the pet, believing his youth to be at stake. He had another student give the teacher a note explaining that he was taking time off school to raise a child.[1]

After three days, Honda returned in time to face Kujirada, whose pet Devil Master, had eaten Anzu Mazaki and Katsuya Jonouchi's pets Sumomo-chan and Joe. Honda introduced the pet as "Super Strawberry". It had since taken after Honda, by holding a mop, reflecting Honda's obsession with custodian duties. Honda connected it to Devil Master to battle. Super Strawberry easily swept away Devil Master, defeating it.[1]