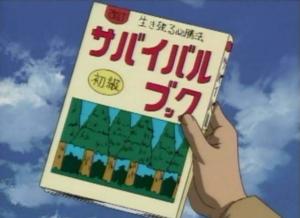 Survival Book is a survival guide in the manga and anime.

Tristan Taylor brought a copy of this with him to the Duelist Kingdom tournament. When he and his friends were hungry, he looked at it for advice. In the manga, it said that they could eat mushrooms. In the anime, it listed roots and berries that they could eat. However none of his friends were too keen and they wound up eating fish Mako Tsunami had left as bait for Duelists instead.[1][2]