Syd Barlow, known simply as Syd in the Japanese version, is the leader of a gang of Duel Runner thieves.

Because of the WRGP, Syd and his gang have been committing crimes involving Duel Runners throughout the city. One night his gang steal a number of Duel Runner and attempt to make their getaway. However, Jack Atlas, who is near the robbery, attempts to stop them, and begins pursuing them, but the gang members are not afraid and neither is Syd, who instead tries to injure him. However, one of the gang members shields Jack, resulting in him crashing and the rest of the gang fleeing. The gang member was actually an undercover member of Sector Security named Kaz, who is knocked unconscious and put in the hospital.

After this, Jack then arrives at their base, as he managed to plant a tracking device on one of gang members. There, he confronts Syd and tells them that Sector Security is on their way, and that they cannot escape. Syd admits defeat, and suggests that the two have a Duel while they wait for Security to come. Syd reveals a special set up for their Duel: each participant is chained to a conveyor belt, and as each player loses Life Points, the conveyor belt moves backwards, and upon defeat, they are dropped into a trash compactor.

Syd gets an early lead thanks to his the piercing effect of "Assault Wheel". As the Duel advances, Syd reveals that their base has actually set sail, as it is really a disguised tanker ship, and that Security won't make it after all. After he Synchro Summons "Combat Wheel", Syd brings Jack to the edge of his conveyor belt. However, Jack manages to Synchro Summon "Chaos King Archfiend", which he borrowed from Kaz. Thanks to its effect, he is able to destroy "Combat Wheel". Lastly he depletes Syd's Life Points, with the effect of his "Nightmare Archfiend Tokens".

After the Duel ends, Jack saves Syd from being crushed in the compactor and then knocks him out with a single punch to the face. 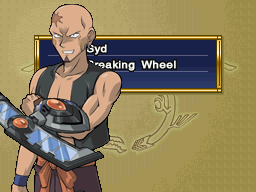 Syd, in Over the Nexus

Syd appears in Over the Nexus as an opponent in Chapter 6, with a similar role to his anime counterpart.

The player can have rematches against him in the Facility after the main storyline is finished.

Syd uses a "Wheel" Deck which is comprised of powerful monsters which have deadly drawbacks.