Syrus Truesdale, known as Sho Marufuji (丸藤翔, Marufuji Shō) in the Japanese version, is a character in the Yu-Gi-Oh! GX manga.

Syrus is a much better Duelist than his anime counterpart, although he is hampered by his desire to not cause pain to his opponents. In the past, he had forfeited a Duel when his friend was in tears, despite victory being in his hands, prompting his brother to consider him too kind to be a Duelist. In the English adaptation, Syrus refers to Jaden Yuki as "bro" which is a play off what his use of the term "aniki" in the Japanese.

This version of Syrus considers this brother's lack of regard for his abilities as something to overcome, rather than proof of his inferiority. He is determined to be acknowledged as a good Duelist.

Syrus was enrolled in Slifer Red at Duel Academy. He spoke with his brother, Zane, the day he started. He had entered to become a strong Duelist like him. However Zane insisted that the Duelist world was a brutal one, which Syrus was no cut out for. He said that someday Syrus' kindness would become a hindrance and that he regretted teaching him how to Duel.[2][3]

Syrus soon became friends with fellow Slifer Red, Jaden Yuki, whom he called his "bro" and said that he wanted to be cool just like him.[4] One day, they spent time playing Frisbee with Jaden's Duel Disk, because it was good at spinning mid-air.[5]

Syrus was among the students, who Dueled Mr. Ryuga, as part of Ryuga's application to be a teacher at Duel Academy. Ryuga used the mechanism in his ring to disable Syrus' Duel Disk's ability to play Spell Cards. This resulted in Syrus' defeat, after which Ryuga took one of his cards as a prize. Syrus checked his Duel Disk afterwards and confirmed there were no faults in it. He told Jaden about his card being taken, causing Jaden to angrily confront Ryuga and become his final opponent for the teacher application. During the Duel, Syrus noted Jaden was also having trouble activating Spell Cards. Despite this Jaden managed to win and Syrus told him he was the best.[6]

When Bastion approached Jaden to ask how Jaden came to know Alexis Rhodes' phone number, Syrus was there and became eager to see the Duelist Kingdom DVD when Bastion mentioned having it. Bastion offered to lend them the DVD, if Jaden could defeat him in a Duel. Syrus and Jaden laughed when Bastion impulsively shouted, within earshot of other students, that Jaden would give him Alexis' contact info, if he won. Bastion then grabbed Syrus and Jaden in headlocks and dragged them away to somewhere more private. As Bastion regarded Dueling as more prideful that allowing Jaden to give him the number, Syrus thought that if he was really that prideful, he could just ask her directly.[7] During the Duel, Syrus received a call from Alexis, who was looking for Jaden, and told her they were Dueling behind the Slifer Red dormitory. Bastion called a timeout at this point, surprised to see that Syrus also had Alexis' number. After Alexis arrived, she asked what the Duel was about and Syrus simply said it was a guy thing and that Bastion had a lot of pride. He let slip that Bastion was being jealous, when noting that his envy grew as his monsters got stronger. When Alexis asked what he was talking about, he hung his head and told her she was quite the enchantress. Although Jaden won the Duel, Bastion decided to show Alexis the Duelist Kingdom first, causing Syrus to again remark that she is an enchantress.[8]

When the finalists for the Miss Duel Academy final were announced, Syrus was shocked to find that Jaden had been unaware of the contest. He and Bastion were surprised when Jaden wanted to leave, rather than wait to see the winner being crowned. He and Bastion both cheered for Alexis, who despite her disinterest in the contest, tied first with Seika Kohinata. Jaden being the only student who had not voted was forced to Duel Alexis over who was to be given the vote and Syrus remarked that things were getting out of hand.[9] Although, Alexis lost she was still crowned Miss Duel Academy. Syrus called Bastion a weirdo as he loudly cheered for Alexis.[10]

Syrus attained the highest score of 91 in a midterm exam, but forgot to include his name on the paper. Following standard procedure, Midori Hibiki gave him a score of 0 in the first draft result sheet and corrected it before submitting the final results. Vellian Crowler later happened upon the draft result sheet and assumed Syrus had actually scored 0. While Syrus was discussing Zane with his friends, they asked why he called Jaden "bro" when he had a real brother. Before, he could answer, he was interrupted by Crowler, who threatened to expel him over the exam result. He gave Syrus one chance to cancel the suspension, where he would need to defeat Jaden in a Duel. As punishment for his own poor grades, Jaden was to risk having his Deck confiscated, if he lost. That night Jaden told Syrus not to worry, because he did not intend to take part in the Duel. However Syrus requested that he go through with it. If he was to be expelled, he wanted his last Duel to be one he would not regret. He wanted to Duel someone he respected and to win and become stronger. Syrus put up a good fight in the Duel, impressing even Crowler, and said that the Duel was the most fun he had all year. He explained why he calls Jaden "bro"; Jaden reminded him on his Zane due to their shared love of Dueling and his desire to become as good as both of them. Although Syrus was defeated, Hibiki showed up and explained that he had not really scored a 0, exempting him from the expulsion.[11][12]

Hibiki had Syrus and Jaden bring the study cards from the reference room to her office. She thanked them on arrival and apologized for grief caused by midterm mix up. Syrus insisted that the experience he got from the Duel was good. He was confused when Hibiki and Jaden spoke about Jaden's Deck, like they had some history together. He also noticed a photo in the office of Koyo Hibiki, holding a trophy, but he did not know who it was. Afterwards, he told Jaden about the photo and asked if it could be Hibiki's boyfriend, but Jaden said it was her brother, Koyo. Syrus had deduced that he was a pro Duelist and asked how Jaden knew who it was. Chazz Princeton then interrupted and said that Koyo was a three-time champion of the Duel World Championships and asked how Jaden was in possession of "Terra Firma", an exclusive card which had been awarded to Koyo. Syrus was puzzled as Jaden simply said someone gave it to him and then insisted that they head to class.[13]

Syrus announced his intentions to take part in the Zane Truesdale homecoming tournament, hoping to win the right to face Zane in a Duel. He, Jaden, Bastion and Alexis made an agreement to try and meet in the final rounds.[14]

In the preliminaries, Syrus won his first three games, before being challenged by David Rabb, who was interested in facing Zane's brother. Before they began, he asked Syrus if he knew of a card with a spirit living inside it. Although he recalled Jaden describing his "Winged Kuriboh" as such, Syrus had a bad feeling about mentioning it to Rabb, so he said "no". Rabb easily defeated Syrus, using his planet card, "The Big Saturn".[15]

Syrus made it to the top eight, but was defeated there by Chazz Princeton, who originally considered Syrus to be weak. Chazz ultimately wins the tournament, and later finds himself paired with Syrus against James Crocodile Cook and Axel Brodie in a Tag-Team Duel. Syrus wins them the Duel, and he earns Chazz's respect in the process, with Chazz acknowledging Syrus as another rival he'll need to overcome. 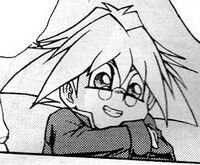 Syrus in the ending of the manga.

In the tournament's single matches, Syrus was matched against Jesse Anderson. He gains an early lead, but Jesse defeats him with "The Tripper Mercury" after being briefly possessed by Tragoedia. He witnesses Jaden and Chazz defeat Tragoedia, and watches Jaden's match against Koyo Hibiki years later.

Syrus plays a Vehicroid Deck, focusing on bringing out various powerful monsters such as "Armoroid", "Barbaroid, the Ultimate Battle Machine" and "Solidroid γ", while using swarming and stalling tactics.