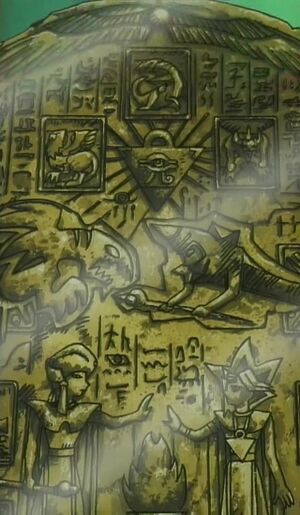 The Tablet of Lost Memories (Memory Tablet in Japanese) is an Ancient Egyptian Tablet built by Priest Seto as symbol of his friendship with Pharaoh Atem in Yu-Gi-Oh! series.

The tablet is first introduced in the Yu-Gi-Oh! series during the Battle City story arc, when Ishizu Ishtar brings it to the Domino City museum. It is observed by Seto Kaiba as Ishizu explains the ancient battle between his and Yugi's past lives. It is later seen by Yami Yugi accompanied by Tea where Ishizu appears and explains that if Yami is to regain his memories he must obtain the three Egyptian Gods as well as the seven Millenium items and bring them to the tablet. In the anime, after Yugi obtained them after winning the Battle City championship, Dartz froze the tablet in crystal and drained the power from the God cards eventually taking them to prevent the Pharaoh from going into the past as Dartz needed him to revive the Great Leviathan. When Dartz was defeated it was brought back to Egypt whereas in the manga it remained in the museum, the tablet is a very important item during the Dawn of the Duel arc, when it is used by Yami Yugi (and Yami Bakura) to travel to the world of the Pharaoh's memories to recovering himself.

The Tablet of Lost Memories depicts a scene from the ancient past of Pharaoh Atem. Among other things, it features: 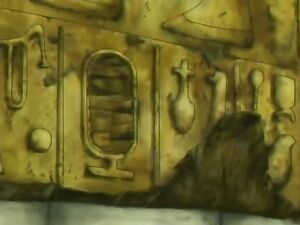 The "Cartouche" section of the Tablet, with Pharaoh Atem's name scratched.
Retrieved from "https://yugipedia.com/index.php?title=Tablet_of_Lost_Memories&oldid=4775433"
Category: