Takashi Todoroki (等々力孝, Tōdōroki Takashi) is one of the main supporting characters and class chairman and a friend of Yuma appearing in Yu-Gi-Oh! ZEXAL. 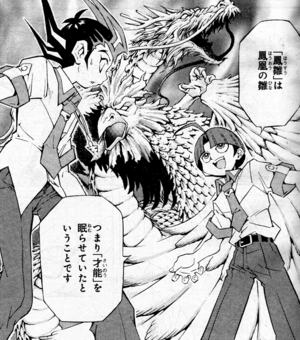 Takashi is part of Yuma's circle of friends, with Kotori, Cathy and Tetsuo. When he heard the rumor that Yuma defeated Shark, he got surprised to hear it was true. He believed that Yuma must have a lot of hidden potential.[1]

Later, The Numbers Club, Yuma and Astral, went to the Heartland Theme Park to find "Numbers".[3]

Takashi and the Numbers Club in their new outfits.

After their escape from the park, Yuma and the members of the Numbers Club gathered in Cathy's house. Tetsuo asked Cathy what she wanted to show them. She pressed a cat paw-like button, which opened a door leading to a big room, with many researchers and big computers. Cathy explained that as an apology for the trouble she caused, the Numbers Club's headquarters would be established there, where they could look up mysterious phenomenons happening throughout the world, and therefore, locate the "Numbers". The Numbers Club then started helping Yuma, wearing new super hero-like outfits.[4]