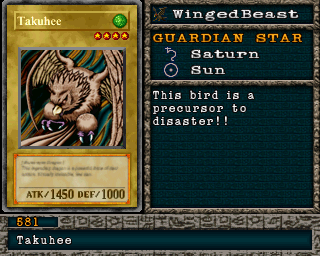 "Takuhee" can be won via random drop from the following characters, when the player scores one of the listed ratings. The chance of winning it is listed as a percentage and a probability out of 2048.

The following characters can use "Takuhee". The chances for each of the 40 cards in their Deck being "Takuhee" is listed as a percentage and a probability out of 2048.

"Takuhee" can be equipped with the following Equip Magic Cards: