From Yugipedia
Jump to: navigation, search
This article is about the Yu-Gi-Oh! GX character. For the Yu-Gi-Oh! The Dark Side of Dimensions character, see Tanya.

Tania is an Amazon warrior and the third member of the Shadow Riders. 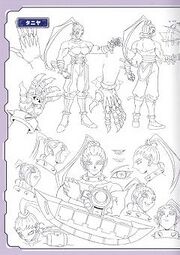 Tania's design incorporates multiple layers of clothing and a wide range of expressions. Depicted here is the Shadow Rider in full regalia from front, and rear alongside views of her head from different angles as well as close ups of her Duel Disk and hands.

Tania's character designs were overseen by Kenichi Hara and is based on an Amazon. Tania's usual outfit consists of a dark blue tank top, a double buckled belt, combat pants, ankle bracelets, an elbow length left and wrist length right glove with studded knuckles. Her left hand has various rings and an "Eye of Anubis" artifact. Her hair is tied back in one long plait or ponytail reaching below her waist. The character is very muscular. She wears her own exclusive Shadow Rider Duel Disk in the shape of a sword on her left arm.

She has a somewhat more unorthodox method of getting the Spirit Keys as she pays students with rare cards to help build her a coliseum and on top of that doesn't even host Shadow Games. She falls in love with Bastion Misawa, and after some sweet talking and showing off her amazing Dueling skills, defeats Bastion and forces him to become her boyfriend for a short time until she grows tired of him due to constantly beating him. She fights Jaden Yuki in a soul match with the effect of "Amazoness Arena". She is actually a tigress, and was able to maintain a human form using her gauntlet Shadow Charm. After losing her Duel with Jaden, she relinquishes her Shadow Charm and leaves with her pet tiger, Bass. 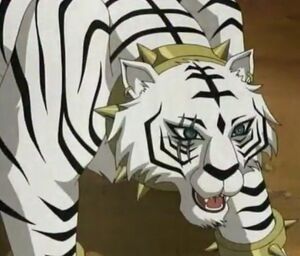 During the third year, she appears before Jaden and his group while they are in the middle of their search for the missing Jesse Anderson in an alternate dimension (where all duel monsters are made living and real). She serves as their guide through the first dimension they encounter, showing them where to go next. She and Bastion stay behind in the recently liberated town to restore order to it. They apparently still have feelings for each other, as Bastion says that he's staying with Tania, and blushes when Syrus says that Bastion is under a love spell. He immediately denies it and Tania smiles at this.

After Jaden is freed from the influence of The Supreme King, she and Bastion re-appear to explain Yubel's plan to combine all twelve dimensions. In the midst of the battle between Jaden and Yubel, she and Bastion are seen staring at the fireballs raging the dimension, due to the fact that Yubel used "Super Polymerization" to fuse all the dimensions together. Tania and Bastion stay in the alternate dimension in order to help it heal after Jaden fuses with Yubel.