From Yugipedia
Jump to: navigation, search
This article is about the character. For the card part, see "Tank" (card part).

Tank, known as Taka in Japanese, is a character in Yu-Gi-Oh! 5D's. He is a resident of Satellite, and close friends with Yusei Fudo, Blitz, Rally Dawson, and Nervin. 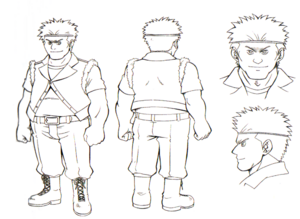 Blitz is a fairly large young man with short, spiky brown hair, a short sleeved green shirt with a sleeveless brown jacket over it, brown eyes, and black jeans.

Tank along with Yusei Fudo, Jack Atlas, Rally Dawson, Blitz, and Nervin lived together in Satellite. Jack left the group after having differing goals with Yusei. He would often help Yusei and the others when Yusei was building his first Duel Runner. He alongside the others, witnessed Yusei summoning "Stardust Dragon" for the first time with his completed Duel Runner.

Tank, Nervin and Blitz are first seen watching the Turbo Duel between Jack Atlas and Hunter Pace, before Yusei comes in to work on his Duel Runner. Shortly afterwards, when Rally Dawson comes to give Yusei a chip for his Duel Runner, he recognizes it as a new chip and asks Rally where he got it. Blitz, Tank and Nervin are later provoked into a fight by Lenny and his gang. Later Tank, along with Rally, Blitz and Nervin are captured by Iliaster and held captive to force Yusei to enter the Fortune Cup. After Yusei made it to the finals, Jack ordered that they be released, saying Yusei wasn't going to run away. Tank and his friends are set free in a scrapyard with a monitor to watch the Fortune Cup final, and are surprised to see Yusei is dueling Jack and that Yusei defeated him.[1]

After Yusei's Duel with Kalin Kessler, he and the others go and see Yusei to make sure he's alright, and find out by turning him over, that he sees a large metal shard impaled into his stomach. After their friend Crow Hogan takes Yusei away to get medical treatment, Tank, Blitz, Nervin, and Rally take Yusei's practically demolished Duel Runnner out of the B.A.D. area, but run into some trouble along the way. Luckily, Blister finds and saves them. They later go to where Yusei is being treated. When the black cloud that envelopes satellite comes he disappears. It is later found out from Rally that he was sacrificed to an "Earthbound Immortal". During Yusei and Roman's second Duel ends, he and all other people from Satellite sacrificed during the Summon of "Earthbound Immortal Uru" are revived.

Much later, he is seen cheering on Yusei in his duel with Z-one alongside Rally, Nervin, and Blitz. [2] He is seen one last time with the rest of his friends driving a truck, when Nervin is annoyed by the lane they were driving on the highway becomes prioritized by a duel. They are shocked to see it is Yusei and Jack dueling, as they pass. [3]