Tenzen Yanagi is an eccentric old man, who meets Yusei Fudo on a paddy wagon after Yusei gets caught by Sector Security and is being sent to the Facility. A cheery old man who is well-versed due to his many travels to foreign lands, Yanagi serves as one of Yusei's allies. In the English dub, Tanner and Blister commonly refer to him as "Grandpa". In the original, he calls Yusei "sonny".

Yanagi is cherry, good-hearted, adventurous, eccentric, intelligent, helpful and insightful, but also a bit of a ditzy old man. While he has a good deck, he struggles making good strategies with it. Yusei was able to show Yanagi its true strength though. 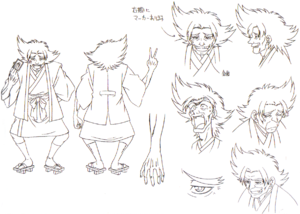 While trespassing in New Domino City, Yanagi witnessed the appearance of the Crimson Dragon while Jack Atlas and Yusei Dueled. He is later captured by Sector Security, and transported to the Facility. (In the dub, a guard tells Yusei that Yanagi has been to the Facility many times before. When Yusei asks Yanagi why this is, Yanagi says that he smuggles his treasures into New Domino, implying that the cards in his Deck are not legal.)

Yanagi meets Yusei on the wagon to the Facility and quickly befriends him. At the Facility, Yanagi Duels Bolt Tanner in place of Yusei, since Yusei had his Deck confiscated. After his defeat, Tanner mocks and stomps on Yanagi's "Crystal Skull" card despite Yanagi's pleas and explanation of how they are valuable to him.[1] Disgusted by Tanner's behavior, Yusei defeats Tanner using Yanagi's cards. After Yusei's performance, Tanner befriends both of them.[2]

When Rex Goodwin tries to confirm his suspicions about Yusei being a Signers, Yanagi informs Yusei about the Signers and the legend of the Crimson Dragon.[3] The warden, Mr. Armstrong, beats up Yanagi for the sake of displeasing Yusei.[4]

Before Yusei leaves the Facility, Yanagi gives him his "Totem Pole" card.[5]

Yanagi and Tanner were later freed thanks to Goodwin.[6] Yanagi stayed with Yusei and kept rooting for him during the Fortune Cup. After Jack and Yusei's Duel ended, he and the others headed to Blister's hideout through a tunnel. Here Luna spoke with Yusei about the vision they saw of Satellite being destroyed. She asked him what a Signer is, to which Yanagi interrupts and explains everything to her. This time he draws a sketch figure, explaining though that it's been a while since he saw this, the drawing represents the Crimson Dragon, as it almost looked exactly like the one on the stone tablet which is in the Sky Temple. Yusei is surprised to see the tail of the dragon (head in the English dub) being the same as his birthmark, and Luna's is one of the claw. Yanagi explains that according to the legend of the People of the Stars, all five of the marks that are engraved in their arms are the divided parts of the dragon itself. Since the Crimson Dragon showed up fully represented during the Fortune Cup, Yanagi concludes that the last Signer must have also been present.[7]

His second-to-last appearance was being seen waving goodbye to the Signers as they headed towards Satellite to take on the Dark Signers in their final showdown.[8] He is last seen cheering on Yusei during his fight with Z-one.[9]

Yanagi plays a Hidden Treasure Deck, based around monsters themed after rare and mysterious objects from all over the world. His cards share the odd characteristic of inflicting damage to himself or forcing himself to discard. The true function of this Deck relies on the combination with "Curse Reflection Doll" and "Triangle O" to reverse the damage to his opponent.