Tetsuo Takeda (武田鉄男, Takeda Tetsuo) is one of the main supporting characters in Yu-Gi-Oh! ZEXAL. He is one of Yuma Tsukumo's friends and is a Duelist.

Tetsuo is part of Yuma's circle of friends, together with Kotori, Cathy and Takashi. At school, when Yuma kept challenging himself with impossible tasks with his "kattobingu" spirit, Tetsuo usually made fun of him, while Kotori was always worried. Yuma used to Duel Tetsuo very often; however, he had yet to beat him.

One day, Kotori and Yuma found Tetsuo has been forced to Duel by Shark, and after being defeated, he took Tetsuo's Deck. Yuma confronted Shark, but Shark took his pendant and broke it. Enraged, Yuma challenged him to a Duel. Shark accepted, and said that they will Duel on Sunday, in the train station. 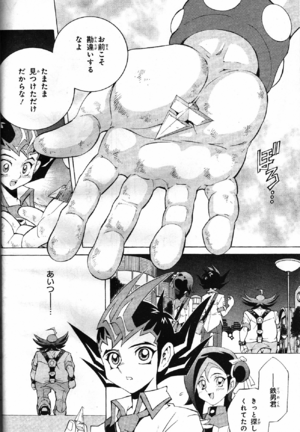 Tetsuo gives Yuma the remaining piece and walks away.

Yuma was searching for the other half of his broken pendant until it was late, Tetsuo appeared and told Yuma not to go, as he would never be able to win, which was a problem of his. Yuma declined, saying that that's already a problem of his as well, as Shark broke his most important thing. Tetsuo gave Yuma the other half of the pendant, saying that he found it accidentally. However, it can be clearly seen that Tetsuo was searching for it as well, judging by its hands. At Sunday, Kotori and Tetsuo watched the Duel to cheer Yuma on.[1][2] During the Duel, as Astral appeared to Yuma, Kotori worried about him talking "to himself". Yuma then asked if she and Tetsuo couldn't see Astral, and they said they couldn't.[3] when Yuma defeated Shark, Kotori and Tetsuo congratulated him.[4]

Later, the Numbers Club, Yuma and Astral, went to the Heartland Theme Park to find "Numbers".[6]

Tetsuo and the Numbers Club with their new outfits.

After their escape from the park, Yuma and the members of the Numbers Club gathered in Cathy's house. Tetsuo asked Cathy what she wanted to show them. She pressed a cat paw-like button, which opened a door leading to a big room, with many researchers and big computers. Cathy explained that as an apology for the trouble she caused with Cologne, the Numbers Club's headquarters would be established there, where they could look up mysterious phenomenons happening throughout the world, and therefore, locate the "Numbers". 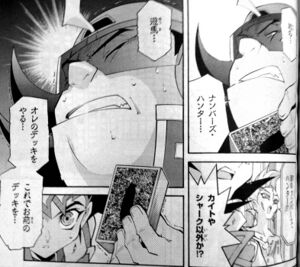 Another day, the Numbers Club gathered at Cathy's mansion, when a big monitor detected a huge source of energy coming from a Duel involving a "Number". Tetsuo rushed there and found Eviluder, a Number Hunter. Meanwhile, Kotori called Yuma, who was sleeping at home, and told him about Tetsuo. They immediately went after him, but when they arrived, they found Tetsuo laying on the ground, injured. Tetsuo gave his Deck to Yuma in order to help him improve his Deck. Yuma took the cards and did so. After that, Tetsuo was hospitalized.[9]

The only known cards in Tetsuo's Deck are "Tin Archduke" and "Tin Balloons". He included the latter card in his Deck when he gave it to Yuma, who used the card against Eviluder.