From Yugipedia
Jump to: navigation, search
This article is about the character. For the original manga drawn by Luke, see The☆Lukeman (manga).

The☆Lukeman (ザ☆ルークメン, Za☆Rūkumen) is a character in the Yu-Gi-Oh! SEVENS anime. It is an electronic life form that came to inhabit one of the many drone helmets that can be worn by the Goha President. The☆Lukeman was created by accident when a manga written by Lucidien "Luke" Kallister during his early childhood—in which it was featured as the titular character—was infused with electricity by a fax machine. This life form would take over a variation of the President Drone helmet to take physical form. 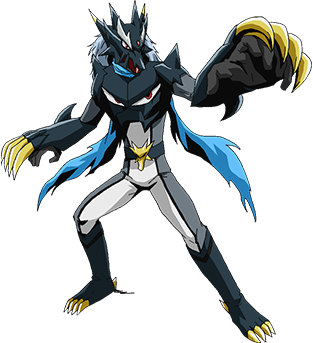 Full-body views of "The☆Lukeman" when controlling Luke and in Perfect Mode.

The☆Lukeman while in its drone form.

The☆Lukeman in its compact drone form is a helmet with a design reminiscent of a dragon head, with the Goha Enterprises logo emblazoned in the middle of the helmet's head and mouthpiece, two full-red visor eyepieces, two gray eyebrows, and two gray-tipped arm-like features that jut out from the sides.

While possessing Luke to become "The☆Lukeman", the helmet's eyes expand outwards to create a red vizor, which is placed underneath the open mouth-like part of its body, but is replaced with two ornamental draconian eyes. Its gray eyebrows turn white while the arm-like features move to the back of its head, the Goha Enterprises logos disappear, and it sports shaggy ash white hair and a tattered blue scarf.

After being granted a costume by the Goha Siblings, The☆Lukeman terms this "The☆Lukeman: Perfect Mode". He wears a grey and black draconian costume with area of white that begin on his chest and continue down the inside of his legs that have clawed feet and gauntlets. He can retract the gauntlets to allow him to Duel without them getting in his way. The chest of the costume is patterned with a similar draconian face as his helmet.

As the spirit of The☆Lukeman brought to life, it acts as the character does in the manga; he is extremely grandiose and bombastic in his speech, often repeating statements twice and referring to himself in the third person. At its core, The☆Lukeman desires to be with Luke and fight evil, creating "Fusion" and seeking him out to control his body. While ostensibly a force for justice, The☆Lukeman's perception of such is against those who would oppose Luke and he has little problem with Dueling Tiger due to her negative depiction in The☆Lukeman as Majin Tiger and is easily swayed to believe Yuga Ohdo is a pawn of evil, working alongside Yuo Goha despite previously defeating him.

According to Yuga Ohdo and the Goha Siblings, The☆Lukeman data that Luke's sister Tiger was trying to fax acquired sentience after she impatiently struck the fax machine the manga was contained in, sending an abnormal energy current through the machine's sensors. The resulting electronic lifeform escaped into the network, desiring to accomplish the goal it had in the story; fusing with Luke and becoming The☆Lukeman. This desire affected the program cards of the remains of many Goha Enterprises satellites in orbit around Earth that had been destroyed seven years prior by Nail Saionji, transforming them into "Fusion", a Spell Card that could fuse Monster Cards together as The☆Lukeman wished to with Luke.[1] It came to inhabit a Goha Enterprises President Drone after Luke's Duel with Yujin Goha, escaping from the wardrobe under the Goha President's desk in the Goha Enterprises Main Office.[2]

The☆Lukeman eventually acquired a copy of "Fusion" and sought Luke out at his mansion, calling to him one night and luring him into the forest.[3] There it forcibly took control of his body, declaring itself The☆Lukeman.[1] The following day The☆Lukeman emerged from the forest to challenge Yuo Goha to a Duel, seeing him as a villain. Yuga, Romin Kassidy, Gavin Sogetsu, Swirly and Tiger all believed him to be Luke, though The☆Lukeman denied being Luke. Yuo began with "Daigyakutenno Megami" backed up by "Imaginary Ark Turret" to prevent The☆Lukeman's stronger monsters from attacking, but The☆Lukeman was able to get around this with the effect of "The☆Star Dragon", lowering the ATK of both monsters and destroying "Daigyakutenno Megami". On his next turn Yuo activated his own "Fusion", fusing his "Imaginary Actor" with the Dragon "Serpainter" into "Metallion Vritrastar", intending to pit Dragons against one another. The anti-Dragon effect of 'Vritrastar" destroyed "The☆Star Dragon", but The☆Lukeman was able to survive with "The☆Barrier". Vowing never to give up despite his pinch, The☆Lukeman was able to draw "Fusion" and fuse "Multistrike Dragon Dragias" with "The☆Dragon" into "Superstrike Dragon Dragiastar F", intending to pit "Fusion" against "Fusion". Yuo to destroyed "Dragistar F" by matching its Type with "Serpainter" using "Imaginary Ark Turbulence", but failed due to "Dragiastar F" being a High Dragon monster, and The☆Lukeman defeated Yuo. Nail Saionji proclaimed Luke the victor, and The☆Lukeman declared he was not Luke, but The☆Lukeman and vanished in a cloud of blue smoke, giving The☆Lukeman the opportunity to relinquish control of the exhausted Luke and escape with "Fusion".[4]

The☆Lukeman continued to follow Luke, hiding behind the hedges at Luke's home while he Rush Dueled Tiger. As the terrified Luke activated "Dragon's Fortitude" to protect himself, The☆Lukeman seized the chance to take control of him again and successfully used Luke's Trap Cards to survive Tiger's attacks, calling her "Majin Tiger" after her depiction in The☆Lukeman. The☆Lukeman was once again able to draw "Fusion" and the Fusion Materials for "Dragiastar F", Fusion Summoning it and using its other Multi-Choice Effect to defeat Tiger. After the Duel The☆Lukeman was captured by Yuo Goha using the Super Mobile Fortress Sixross and transported to Yuo's room.[5]

Following the Duel with Majin Tiger, The☆Lukeman had been drained of energy and allowed himself and Luke to sleep to recover in Yuo's room, informing the President Drone of the process. He awoke after the Rush Duel between Nail and Asana Mutsuba, leaving Sixross of his own accord to stand alongside Yuo, where he was challenged to a Rush Duel by Yuga.[6] Accepting Yuga's challenge as he believed him to be a pawn of evil, The☆Lukeman was suddenly surrounded by his costume, declaring this The☆Lukeman: Perfect Mode. He began with "The☆Star Dragon", using "The☆Block" to change Yuga's "Sevens Road Magician" and "Sevens Road Witch" into Defense Position, but to his shock Yuga called him naïve and donned a costume as well, claiming to be Majin Yuga, a servant of the Majin Empire. He changed his monsters back into Attack Position with "Devil's Power" and destroyed "The☆Star Dragon", damaging The☆Lukeman's LP significantly. Admitting Majin Yuga was a fearsome opponent, but knowing he couldn't afford to lose, The☆Lukeman was once again able to draw "Fusion", "Dragias" and "The☆Dragon", Fusion Summoning "Superstrike Dragon Dragiastar F". He used its first Multi-Choice Effect to attack both of Majin Yuga's "Sevens Road" monsters, but Majin Yuga was able to survive by using "Magical Switch" to switch "Sevens Road Witch" with "Sevens Road Magician", hanging on with 200 LP. As The☆Lukeman told Majin Yuga to realize there was no point in struggling against him, Majin Yuga claimed The☆Lukeman was the one who didn't understand and assumed a new form, The☆Yugaman, claiming to be one of The☆Lukeman's comrades from his planet.[1] The☆Yugaman and his allies, The☆Beauty Romin, The☆Jushin Tiger, The☆Princess Asana and The☆Heavy Cavalry Rangers, The☆Professor Gavin, The☆Masked Advisor M and The☆Swirly all urged The☆Lukeman to realize that he was being manipulated to fight The☆Yugaman, and the apparent culprits, the Goha Aliens, revealed themselves and took The☆Beauty Romin hostage to force The☆Lukeman and The☆Yugaman to continue their Rush Duel. Although The☆Yugaman destroyed "Dragiastar F" with "Ultimate Flag Mech Ace Breaker", The☆Lukeman negated his direct attack and used "Peace Dragon" to return "Fusion" to his Deck, prompting Yuo to throw off his Goha Alien costume and angrily ask if either of them were taking the Rush Duel seriously and if The☆Lukeman had only pretended to work with him. The☆Lukeman continued the Duel, managing to re-draw "Fusion" as he had hoped to do and Fusion Summon "Full Moon Dragon Umbrlancer F", using its effect to revive "Dragiastar F", though The☆Yugaman also revived monsters to defend his LP and sruvived the turn. On his next turn The☆Yugaman revived "Sevens Road Magician", so The☆Lukeman used "Road Crusher" to return the monsters in The☆Yugaman's Graveyard to his Deck and prevent him from using the effect of "Sevens Road Magician". In response The☆Yugaman activated "1/Infinity" to return all the Spells in their Graveyards to their Decks and force them both to draw a card, but he would lose if they didn't draw the same card. The☆Lukeman drew "Fusion", which The☆Yugaman didn't have, but then a meteor entered the atmosphere and plunged towards The☆Yugaman, and The☆Yugaman blocked it with his Duel Disk and drew "Fusion", which had been contained within the remains of the satellite The☆Lukeman had affected. The☆Yugaman Fusion Summoned "Sevens Paladin the Magical Knight", whose effect allowed it to gain ATK for Attributes in both Graveyards, and successfully sent the EARTH monster he needed to the Graveyard to increase its ATK high enough to destroy The☆Lukeman's monsters and defeat him.[7]

After the Duel The☆Lukeman thanked Yuga for such a heart-pounding battle. Once Yuo's attempt to destroy the Super Rush Robot had been foiled, The☆Lukeman released Luke and told Yuga he would go back to space, but would return if they found themselves in trouble. Thanking Yuga again for a brief, but unforgettable meeting, The☆Lukeman returned to his Drone and left Earth.[7]

While The☆Lukeman is possessing Luke, it uses Luke's Dragon Deck, also slipping in a variety of "The☆" cards, which Luke keeps afterwards.