The Beast (unnamed in the Japanese version) is Greiger's Duel Runner.

The Beast is the largest known Duel Runner and is modeled after a dragster. A large skull is mounted on the front. A set of back tires are detachable, in order to reveal a set of blades mounted on each axle, similar to a war chariot. It also has a very loud engine, which caused Yusei to lose concentration during the Duel. 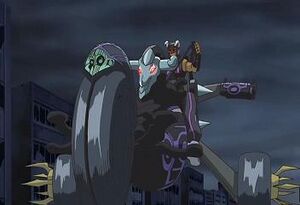 After becoming a Dark Signer, Greiger redesigned The Beast for Shadow Turbo Duels, making it more powerful than before. He included a new design featuring the skull now sporting curved horns, geoglyph patterns along the frame and a new set of spiked axles. It was crushed by falling debris after Greiger rammed it into the Blackbird to save Crow.

After Greiger is revived back to his normal self, he gets a new Duel Runner.