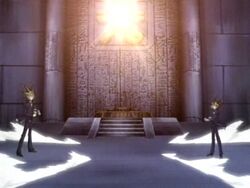 Both the Pharaoh and Yugi have obtained all 7 Millennium items and all 3 Egyptian God Cards. The Pharaoh has defeated Zorc Necrophades in the memory RPG and the latter has finally learned his true name. Soon it was time for the final test to see if Atem and Yugi were finally ready to separate for good; Atem would have to be defeated in a duel where he was actively trying to win, demonstrating that he had learned from Yugi that one did not need to win all the time and that defeat could teach us just as much as victory.

Originally planned to travel to Luxor in the Cairo International Airport, a sandstorm brewed over the Valley of Kings, blocking that path. Marik and Ishizu Ishtar step in to help them, and they proceed to the Valley of Kings by boat from where it was stated that the sandstorm might have not been without purpose due to the ancient belief that ships carried kings or people back from the gods as it says, from this world to the afterlife. Both Joey and Kaiba (in the manga, Kaiba wasn't in this arc) asked Yugi if they could battle the Pharaoh. Yugi declined both requests, feeling that battling the Pharaoh was something he had to do to prove to himself that he was ready to separate from him.

The boat docked, and everyone there was waiting for him. Ishizu then led them across the desert to an underground cavern all the way to the back, where there was a large door with a carving of The Eye of Wdjat which Ishizu explained would unravel the Pharaoh's spirit from Yugi's, further explaining that in order to pass on, he must act the Rite of the Duel. Yugi approached the Shrine of The Millennium Items and placed all the seven Millenium Items in their appropriate places. A wave of light passed over Yugi, His shadow started to split in half and then his body. The Pharaoh and Yugi walked opposite ways to the far sides of the cavern. The Final Duel had begun.

Summoning of the Egyptian Gods[edit]

The Created Bonds of the Past and Present[edit]

Yugi falls to his knees, cries and tells Atem that he (Yugi) is weak. Atem tells him that he would not cry if he were in his place. Yugi says that that is the point, he admits that he could not follow in the footsteps of Atem. Atem reminds him that he is not a coward and it was he who taught Atem about the principles needed to win. He also says that now he is leaving, there would be no one else for Yugi to follow and that there would only be one Yugi.

The Eye of Wdjat glows on the wall, and Ishizu says the spirit of the Pharaoh has been freed. Atem stands before the Eye and declares that he is Atem. The wall parts to reveal a glowing light, and Atem walks towards it. Téa, Joey and Tristan step forward, asking him if this is how it ends: Atem can't show up, change their lives, and leave.

Yugi says that they don't want to say goodbye, and Téa cries that while she knows its for the best, it doesn't seem fair that Atem has to leave. They were just getting to know him, and Atem was just getting to know himself, but now he's leaving. She knows they should be happy for him, but its hard when they're losing their best friend and they don't understand why. Joey says there are some things they aren't supposed to understand: he goes through half his life like that. But he does know that while Atem's stay isn't as long as they'd like, they were lucky to know him at all. Atem silently thanks him, and Téa wishes him luck.

Joey shouts that Atem isn't going anywhere: the memories he gave each of them will remain in their hearts. Joey and Yugi give Atem a thumbs-up, and Atem returns the gesture as he walks forward. The Pharaoh's cloak and clothing appear around him as images of Adviser Siamun, Mana, Akhenamkhanen, and the six priests (Young Akhenaden, Mahado, Seto, Isis, Kalim and Shada) greet him. Atem vanishes into the light, the wall closing behind him.

The Wdjat temple then starts to crumble as the Millennium Stone shatters, scattering the Millennium Items in a bottomless pit. They all run away from the temple while Shadi's spirit watches the temple he protected crumble, his duty being fulfilled, the Pharaoh's spirit has gone to the Afterlife.

The Start of Yugi's Story[edit]

(This is in the one-off end credits. This is not shown in the English anime nor the manga as it ends with them still being in Egypt.)

Yugi, Téa, Joey, Tristan, Duke, Grandpa, Kaiba, and Mokuba all leave Egypt and return to Japan. In the airport, they meet up with Rebecca and Serenity. Both Duke and Tristan fall for Serenity, but are pulled back by Joey. Rebecca hugs Yugi much to Téa's annoyance.

Weevil Underwood and Rex Raptor get into an argument again and decide to duel. Zigfried and Leon von Schroeder make a business proposition with Pegasus, which turns to their favor. Mako Tsunami sets sail from his fishing trip to be met up with Espa Roba at the harbor. Mai Valentine and Vivian Wong are facing a two-on-two duel against the Paradox Brothers atop the Great Wall of China.

The credits end with a cutscene where Grandpa is sweeping while Yugi comes out from the house to join Téa, Joey and Tristan to go to school. Yugi ends the show by saying that his story has not ended and that his story is not about a pharaoh who after three thousand years defeated the evil Zorc. 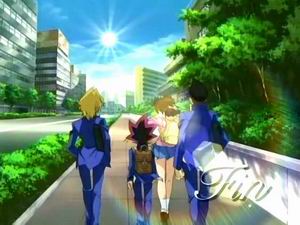 This isn't the legend of a Pharaoh. Everybody has his own story....The story that completes in the light. My story has just started.

In fact, he says that his story is just beginning. This alludes to the famous phrase "This isn't the legend of a Pharaoh. Everybody has his own story....The story that completes in the light. My story has just started." FIN