Linework of The D in his normal state.

Linework of The D possessed by The Light of Destruction.

The D is a tall bespectacled and bearded man with dark hair and pale skin. He wears a dark grey suit over a black undershirt.

When the D's normal personality is in control, his hair is smoothed back and he has an almost permanent worried expression on his face, however when his split personality takes over, his hair becomes wilder and spiky, his eyes narrow evilly and he has a sadistic evil grin. When The Light of Destruction completely takes over, his eyes glow red, as seen when he Duels Doctor Collector.

The D presents himself as a polite and calm man, but in reality he is opportunistic and ruthless, attempting to steal "Destiny Hero - Plasma" as soon as he learned about it and adopting Aster Phoenix to avoid suspicion for attacking Mr. Phoenix.

In the dub, the name The D uses as Aster Phoenix's guardian is Kyle Jables. This is an allusion to the comedy band Tenacious D who sometimes call themselves The D. It's a pun of the band members' names, the band and their names Kyle Gass and Jack Black AKA Jables, which can further be suggested with the fact that his key card's Japanese name ends with a D, being named "Bloo D", much like the band, as well as being the band member's defining trait. His name in the Japanese version stands for "Destiny Duelist", fitting into the theme of the "Destiny Heroes". 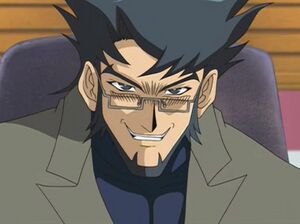 The D while possessed by The Light of Destruction.

After learning about "Destiny Hero - Plasma" from Aster, who came to retrieve the card design after it was blown away by the wind, The D broke into Aster's family's apartment to steal the card. However, upon being interrupted by Aster's father, the D intrigued the interest of The Light of Destruction possessing the card, causing him to developed a sadistic and uncaring split personality bent on destruction. Thus enabled, he murdered Aster's father in cold blood (kidnapped in the dub, although he strongly alludes to killing him) and took the card for himself. After the theft, The D became Aster's legal guardian in hopes of avoiding detection. He later becomes the Pro League Champion and holds his title for ten years. One of his opponents was Mr. Stein, although their Duel ended inconclusively due to Stein's illness brought on by fatigue. In unofficial underground Duels however, he took the souls of countless Duelists with "Plasma". Not long before the events of the series, The D sought out the fortune-teller Sartorius and showed him the "Plasma" card, causing The Light of Destruction to take up residence in Sartorius's body, though a portion of it continued to influence The D.

The D Duels Doctor Collector in order to retain his title where he defeats Collector with "Plasma", setting the arena ablaze and subsequently doing away with Collector. He is then confronted by Aster on his boat, who is in total shock when The D shamelessly confesses to his crimes and then challenges Aster to a Duel. Although he uses "Plasma" to oppose all of Aster's usual strategies, it is trumped when Aster uses "Destiny Hero - Dark Angel", who was designed to counter "Plasma". After being defeated, The D gets caught in the explosion resulting from the card's purification. He swears to "return one day" before being engulfed in the flames, although his death is apparent in the Japanese version.

The D plays a Destiny Hero - Plasma Deck, which focuses on the Summoning of "Plasma", which he stole from Aster's father. He also uses many support cards for "Plasma", including its primary supplementary card, "D - Force", which makes it immune to Spell Cards, Trap Cards, and the effects of Monster Cards.