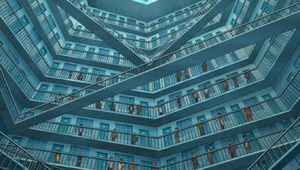 A section of the Facility.

The Facility, known as the Detention Center (収容所 Shūyōsho) in the Japanese version, is a prison in New Domino City.

The center is governed by the Sector Security. The Director has full control over the staff.

Mr. Armstrong was the chief. He was known for being cruel to the inmates and prejudiced towards Satellite residents. After his Duel with Yusei Fudo, Goodwin told him that he had been watching the match, then said that he was the one who would be leaving. (In the dub, Goodwin said he can't see peace when there exists no trust between the guards and inmates, then says for Armstrong to pack up his things and that he's fired.)

Yusei Fudo was sent to the Facility for trespassing in New Domino City. On the way, he met Tenzen Yanagi in the paddy wagon.

Yusei was challenged to a Duel by Bolt Tanner. However, Yusei had his Deck confiscated, so Yanagi who managed to sneak cards in, Dueled Tanner instead. Yanagi quickly lost and had his cards ridiculed by Tanner, who stomped on them and refused to move his foot, despite their value to Yanagi. Yusei tossed Tanner aside and challenged him to a Duel using Yanagi's cards. Yusei won, earning respect for himself and Yanagi.

Rex Goodwin suspected Yusei was a Signer and had Mr. Armstrong perform tests on him. Armstrong develops a dislike for Yusei and sends him to a different part of the center.

In his new cell, Yusei meets Alex who has been planning an escape and invites Yusei. Yusei accepts provided that they can bring Tanner and Yanagi too.

Armstrong planted a knife in Tanner's cell (In the English version, he accused him of smuggling magazines inside). Armstrong beats Tanner badly, extends his and other inmates sentences and forbids them from leaving their cells. Yusei objected to Armstrong calling the inmates worthless. This results in Armstrong challenging Yusei to a Duel. Should Yusei win, Armstrong would forget Tanner's crime and not lengthen Yusei's sentence. Should Armstrong win, Yusei would be at Armstrong's mercy. Yusei agreed despite the time of the Duel, interfering with his escape plans. Yanagi was then brought up to Armstrong where he is beaten and has his cards confiscated in front of the other inmates.

Yusei refused to escape with Alex as Tanner and Yanagi were in no condition to come with them. The other inmates supplied Yusei with cards to use against Armstrong.

Yusei faced Armstrong in an arena, where both players were chained in one place and received electric shocks as their Life Points lowered. However, Armstrong rigged the arena, so that he couldn't get shocks. Armstrong also used security cameras to see the cards in Yusei's hand. Alex abandoned his escape plan and broke into the control room, where he switched on Armstrong's shocks and broke the computers, so the settings couldn't be altered. Yusei managed to win the Duel. Rex Goodwin appeared at the end of the Duel. He granted Yusei freedom.

Tanner and Yanagi were released shortly after Yusei.