The Get the Million Game 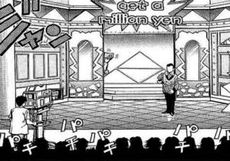 The Get the Million Game.

Contestants are chosen from a selection of postcard applications sent in. The producers try to pick people they believe can help them boost ratings.[1]

The show consists of 3 games. A host is present to introduce the games and announce the player's results. A blonde and a black haired girl in bunny costumes assist in setting-up the games. The games are as follows:[1]

An intermission with words from the show's sponsors take place after the first two games.[1]

The final stage, The Wheel of Fate has a prize of ¥1,000,000. This amount includes prize money already won. If players fail in this game, they lose all the money they're won so far. Normally this game is rigged so that the player will always lose.[1]

Katsuya Jonouchi tried to take part in the show in order to pay off his father's gambling debts. Jonouchi sent in a postcard, which he decorated with rainbow colors to make it stand out. People running the show did a background check on him and found that he lived in poverty. They believed that his "sob story" should boost ratings and seeing him fail at the last minute would boost them even more.[1]

When Jonouchi was on the show, he cleared the first two stages. During the intermission, Yugi Mutou left to go to the toilet. However he overheard the producer and a technician talking about how the show was rigged and they were using Jonouchi to boost their ratings. In his anger, Yugi switched to Dark Yugi.[1]

Dark Yugi caught up with the producer and technician backstage where they were about to push a button that would ensure Jonouchi fails the final stage. The button was colored red on a switchboard. Dark Yugi challenged them to a game, where each player had a 50-50 chance of pulling a bucket of red paint on top of themselves, threatening to tell people how the game was rigged if they didn't take part. The technician took part in the game and ended-up pulling the paint can on top of his head. With him unable to press the button, the producer tried to do it, but found the red paint had splattered onto the switchboard, making all the buttons red. He didn't know which button to press and Jonouchi won the final stage.[1]

The host was surprised that someone actually won in the final stage, as he had never seen it happen before. The producer then went crazy in front of camera, revealing how greedy he was due to the "Mind on Air" Penalty Game, Dark Yugi had inflicted.[1]

Several days later, because of the producer's debacle, the company went bankrupt before Jonouchi cashed his check, making it worthless and preventing him from getting his prize money, much to his chagrin.[1]