The Light of Destruction

The Light of Destruction's ultimate ambition in the original has been described as destroying all life in the universe (its been referred as the "light bent on destroying the universe," or something similar multiple times), but the Light is arrogant in its beliefs that its actions are justified. The Light boasts that destruction is the destiny of the universe and actually claims that the universe had been destroyed many times before (whether it was lying or not is ambiguous).

In the dub, the Light of Destruction wishes to dominate all life in the world, going as far as saying that it wants life to "worship" it, but the Light is arrogant in its beliefs that its actions are justified. It boasts that humans would go on a path to self-destruction despite the fact that it displays no regard for human life. 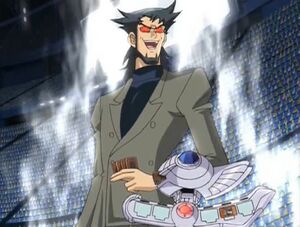 The D possessed by the Light.

For billions of years, a white hole released a mysterious energy called the Light of Destruction.

Yubel came into contact in with this energy while she was in space, which distorted her sanity, though it was unable to control her, presumably due to her being a spirit of darkness providing protection. Jaden had also always been the individual destined to obliterate the Light with Yubel being specifically created to protect Jaden's ancestor The Supreme King until he was old enough to utilize his latent power to complete his mission.

When this energy reached Earth it caused several calamities such as dictatorships and wars.

Ten years before the events of the second season, the Light of Destruction was released, infecting a card created by Aster's father, "Destiny Hero - Plasma". When The D acquires the card by murdering Aster's father, it possesses him, causing him to develop an uncaring and sadistic alter ego.

Afraid of what is happening to him, The D consults with a fortuneteller named Sartorius. The Light takes Sartorius as his main host instead, but a small portion remains within The D, which helps him to ascend the Pro League and become world champion. 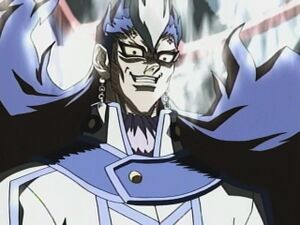 Sartorius possessed by the Light.

After possessing Sartorius, it sets the stage for the events of the second season by amassing a cult of brainwashed students and acquiring a satellite capable of extinguishing all life on Earth (in the dub, the satellite would cause a mass-brainwashing of all Earth's populace). 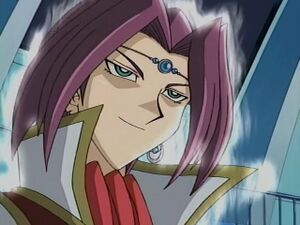 Prince Ojin possessed by the Light.

It later partially infects Prince Ojin, who had been brainwashed to serve Sartorius in the Society of Light. It is ultimately sealed away, releasing Sartorius from its influence due to the efforts of Jaden and Aster. However, only the portion of it controlling Sartorius was destroyed and the Light still exists in the universe.

Near the end of the third season, Jaden learns that the Light of Destruction made his childhood card, Yubel, even more dangerous than it was before. He is also soon taken to the past where he learned that Yubel was given the mission to protect a young prince, who held the power of The Supreme King, as he fought the light waves of chaos. As a result Jaden decided to fuse with the soul of Yubel, and together they went off to fulfill the mission.