The Mystery of the Megalith 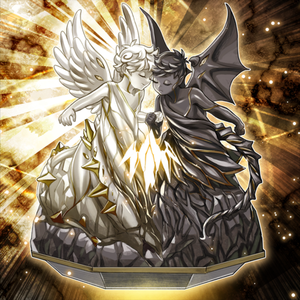 "Megaliths" have the unique ability to call forth Ritual Monsters without using Ritual Spells.

The power of "Megaliths" open the door to new Rituals!

The Mystery of the Megalith is the sixth Solo Mode Gate in Yu-Gi-Oh! Master Duel, and focuses on the Megalith archetype.

Like most Gates in Solo Mode, each Duel can be played with either the player's own Deck or a provided Loaner Deck fitting the theme of the Gate, with separate rewards for each. Completing this gate for the first time unlocks the Miraculous Advent Secret Pack for 24 hours.

Learn the ins and outs of the "Megalith" Deck.

This chapter serves as a tutorial for using Megaliths.

A simple Deck that includes a range of highly versatile Spell and Trap Cards along with Rock-Type support to help Ritual Summon "Megalith" Monsters more smoothly. As this Deck uses a lot of Cards from the hand, make good use of "Pot of Extravagance" to keep your hand topped up with plenty of advantage.

A Deck that teaches you the basics of "Megaliths." Discard a Level 8 "Megalith" Monster from your hand to activate their Effect and Ritual Summon "Megalith Ophiel" or "Megalith Hagith." Keep your hand topped up and ready for your next Ritual Summon. You can use "Earth Chant" when you don't have enough Monsters to Tribute.

A Deck that combines "Megaliths" and "Nekroz." This deck is unique because Ritual Monsters of both archetypes can activate from the hand and have powerful Effects that activate on the Field to push you onwards to victory. Also, note that "Megalith Bethor" and "Megalith Phaleg" grow stronger with each Ritual Monster sent to the Graveyard.

A Deck that uses the "Adamancipators," an archetype that offers a wide range of support for Rock-Type Monsters. Ritual Summon "Megalith" Monsters to help with even more Ritual Summons, or try Synchro Summoning with the help of "Adamancipator Researcher" depending on the circumstances. The wide range of options this Deck offers is what makes it so formidable.

This Deck uses the Rock-Type "Megaliths" to Ritual Summon powerful Monsters, then turns the Rock Monsters in the Graveyard into Fusion Materials with "Fossil Fusion." Unleash a barrage of attacks on your opponent by Ritual and Fusion Summoning efficiently.