The Resistance (レジスタンス Rejisutansu) is a group of Duelists originating from the Xyz Dimension fighting against Duel Academy appearing in the Yu-Gi-Oh! ARC-V anime. Their hideout is located in one of the ruined buildings of Heartland, equipped with tents and makeshift wells.[1] They later moved to the Duel Sanctuary.[2]

The group came to be formed after their city was maliciously attacked by Duelists from Duel Academy.[3] During that time Shay's sister, Lulu, was captured. None of the members of the Resistance knew where she was.[4] The backbone of the Resistance was formed by Duelists from the Clover and Spade branches of Heartland Duel School, who were training to become professional Duelists.[2]

After finding out that Leo Akaba had a son, Yuto and Shay concluded that if they captured that son they'd be able to do a hostage exchange and recover Lulu, so they went to the Standard Dimension to target students of LID in order to lure out Declan.[5]

Sometime after Yuto and Shay left, Duel Academy carried out a large assault. Most of the Resistance was wiped out, with what survivors (and non-combatants) remaining relocating to the Duel Sanctuary.[2] Kite also chose to cut ties with the rest of the Resistance after his family was sealed into cards and seeked revenge.[6]

The Resistance's Spade forces were almost destroyed by the Tyler sisters.[7]

Yuto Dueled against Sylvio and asked him how LID was connected to Duel Academy. Sylvio responded that he had no idea what Yuto was talking about.[8] Sometime later Shay succeeded in his plan to lure out Declan, only to find out that the plan was futile as Leo Akaba didn't care much about his son. Declan instead offered an alliance to Shay if he participated in the Arc League Championship.

After being defeated by Yugo, Yuto's soul was absorbed by Yuya, leaving Shay as the only member of the Resistance in the Standard Dimension.[9]

During his Duel with Shay, Dennis explained the story of how he met Lulu among the Resistance members.[1]

When Yuya, Gong, Shay, and Sylvio were accidentally warped to the Xyz Dimension, Shay split up with them to check on the Resistance's base. He found it abandoned and concluded that this comrades had been wiped out in his absence. Yuya, Gong and Sylvio wandered through the dilapidated streets and had found a refugee family who told them that most of the Resistance was wiped out by Duel Academy's students.[5]

Reaching their hideout, Kite asked his Resistance comrades to go together with him and assist Yuya, arriving just in time as Mamoru Noro ordered the Duel Academy soldiers to attack Yuya along with Aster and Tyler sisters who have decided to defect. He reminded Mamoru that he should be facing him first since he was on Duel Academy's wanted list, though the former doubt he could beat him and his Resistance comrades. He challenged Mamoru to Duel him if he has the resolve to put his life on the line, forcing the frightened Vice Commander-in-Chief to surrender.[10] 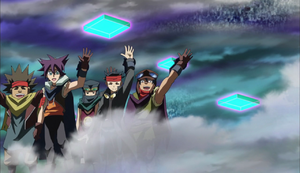 Due to the dimensions merging, members of the Resistance were freed from their cards and were seen on a floating island. They noticed Allen and Saya and waved to them.[11]