The Steam Dinosaurs of Unchartered Lands 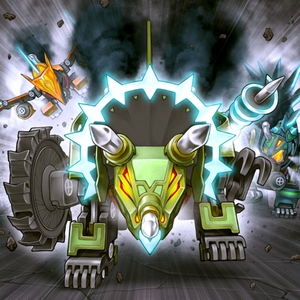 The "Dinomist" are Monsters that are both powerful in battle and ironclad defenders against destruction.

Survive the fiercest battles with the power of Steam Dragons!

The Steam Dinosaurs of Unchartered Lands is the thirteenth Solo Mode Gate in Yu-Gi-Oh! Master Duel, and focuses on the Dinomist archetype.

Like most Gates in Solo Mode, each Duel can be played with either the player's own Deck or a provided Loaner Deck fitting the theme of the Gate, with separate rewards for each. Completing this gate for the first time unlocks the Advanced Warriors Secret Pack for 24 hours.

Learn the ins and outs of the "Dinomist" Deck.

This chapter serves as a tutorial for using the Dinomists.

A Deck combining "Dinomists" and "Luster Pendulum, the Dracoslayer" to Fusion, Synchro, and Xyz Summon. You can even Link Summon with the right combination of Monsters, so make use of it and the Deck's ability to Pendulum Summon to fill your Field with powerful Monsters!

A Deck that teaches you the basics of "Dinomists." Use "Dinomist Charge" to set up your hand for a Pendulum Summon. "Dinomist Rex" has a very powerful Effect that allows you to return an opponent's Card to their Deck if it attacks. Protect it well from being destroyed in battle, then launch an aggressive attack!

This chapter becomes available after completing the first Duel. It can be unlocked by spending 200 WATER Orbs.

A Deck that combines two archetypes that use Pendulum Summons, "Dinomist" and "Zefra." It's important to pick the Pendulum Monsters to activate in your Pendulum Zones wisely. Try pairing "Zefraath" with a "Dinomist" Card. This combination will allow you to freely Pendulum Summon Monsters from both archetypes!

A Deck that combines "Dinomist" with another Machine-Type WATER archetype, "Crystron." Use the Effects of "Crystron" Tuners to perform Synchro Summons with "Dinomist" Monsters that are either in your hand or Banished. Revive the "Dinomists" that were used as Materials by Pendulum Summoning them to the Field and bring yourself one step closer to victory!

A Deck that combines WATER "Dinomists" and various WATER Tuners. You can use your Pendulum Summoned "Dinomist" Monsters, as well as Tuners brought out with Cards like "Whitefish Salvage" and "White Mirror" to Synchro Summon Monsters such as "White Aura Whale."

A Machine-Type Deck that combines "Dinomists" and "Deskbots." Pendulum Summon by activating two "Dinomist" Cards in each Pendulum Zone. By coordinating your Pendulum Summons with "Deskbot 005," a Card that can destroy Spell and Trap Cards with its Effect, you can gain an even greater advantage for yourself.