From Yugipedia
Jump to: navigation, search
This article is about the Yu-Gi-Oh! GX character. For the Yu-Gi-Oh! ARC-V character, see Z-ARC. For the archetype of the same name, see Supreme King.

The Supreme King ( Haō) is the wielder of The Gentle Darkness and the past incarnation of Jaden Yuki that possessed him while he was in the second alternate dimension searching for Jesse Anderson. He serves as the second main antagonist of the final third of season three after Brron and his Dark World Army are defeated, starting from episode 136 until his defeat in episode 143.

According to Bastion Misawa (and later confirmed by Yubel herself), it was Yubel who orchestrated the possession of the King over Jaden, with the intent of taking The Gentle Darkness, and ruling over the united twelve dimensions together. 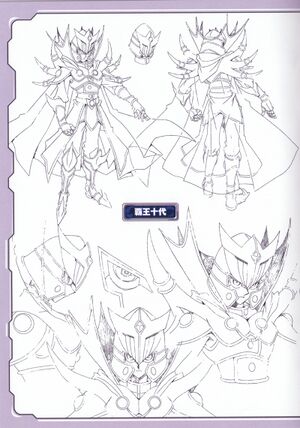 The Supreme King is a shadowed figure dressed in black and gold medieval knight-esque armor with six tendril-like spikes, two jutting out of the armor's back and four jutting out of the shoulders, a headdress with a tall collar and a floor-length red cape. To signify his position as the Supreme King, he also wears a black helmet that functions as a crown. When he possesses Jaden, he dons his aforementioned outfit and Jaden's eyes become golden, giving him a somewhat demonic look. Jaden's face also elicits anger and hatred through a constant scowl, and he speaks in a bland monotone (in the dub, his voice is coarser than usual).

Unlike Jaden, The Supreme King is cold, collected, arrogant, ruthless, and merciless, but always carries an air of intimidation as noted by Axel Brodie. The Supreme King is also quite condescending, often mocking his opponent as he sees their efforts as futile because they are weak in his eyes, although he doesn't deviate from his reserved attitude while doing so. As the Supreme King, his cruelty has no bounds as he is willing to sacrifice as many people as he has to in order to accomplish his goals along with his lack of remorse after defeating someone himself. However, he doesn't actively hunt for opponents; this was shown when he let Axel leave his castle without giving chase after defeating Jim Crocodile Cook, and he only Dueled Jim because it was the latter that challenged him.

The Supreme King reveals himself as Jaden.

The Supreme King is also quite taciturn and succinct, only talking when it is required or to spite his enemies. He, of course, does have a small sense of humor, as when he was chuckling softly when Axel thought he'd gotten the upper hand.

Although Jaden and The Supreme King are both played by the same voice actor (KENN in the Japanese version and Matthew Charles in the English version), their voices are very different. In the Japanese version, The Supreme King's voice is much deeper and foreboding in Jaden's subconscious while it is still Jaden's voice, but harsher and forceful on the outside though it is in a monotone. In the dub, his voice is a harsher version of Jaden's voice complete with electronic effects; while his voice does show emotion, it is never anything more than anger.

The King wields the mighty Gentle Darkness, the power which opposes the Light of Destruction.[1] He can emit darkness powerful enough to generate shock waves[2][3] and to create a dark aura around himself, which can increase itself enough to become a miasma.[4] While Dueling, his opponents as well as spectators feel an enormous pressure coming from him,[3] which can later result in them becoming afraid of him.[3][5]

With the power of the Gentle Darkness to command Duel Monster Spirits, he possesses incredible leadership skills as seen when he formed his own army, declared himself the new monarch of the alternate dimension, and conquered large territories of that world in only a couple of days.

The Supreme King is first mentioned by Sky Scout, after the latter was defeated by Jaden Yuki. Amazed by Jaden's courage and equity, Sky Scout begs Jaden to defeat the evil that rules his world (the Supreme King) and to become King himself.[6] 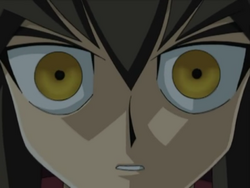 Jaden's eyes turn golden when the Supreme Kng is awakened.

As Jaden went deeper into the alternate dimension, he could not control his emotions, especially anger and hatred, which resulted the awakening of his dormant powers. When Zure, Knight of Dark World killed a boy, who resembled Jesse Anderson, a glowing aura appeared around Jaden and Zure remarked that he is not like the other Duelists.[7] When several of Jaden's friends were sacrificed during the Duel with Brron, Mad King of Dark World, Jaden let his hatred and anger to take control over him which awakened the Supreme King's powers inside himself. Jaden, unfortunately used that powers in the Duel to get revenge on Brron for the loss of his friends. Although the Duel ended with Jaden's victory, his remaining friends were disappointed by his action and left him alone.[8]

After the Duel the spirit of the Supreme King reacts to Jaden's negative emotions and tempts him to evil with the "Super Polymerization" card that Brron previously tried to complete. He suggests that to truly defeat evil, an shocked Jaden himself must become evil. He successfully convinces Jaden, as thus far, being heroic had done nothing but get his friends killed.[8] While in control, his first action is mobilizing an army to slaughter numerous Duelists in order to complete the "Super Polymerization" card.[9] He later begins to oppress many local villages, coercing their allegiance through strong-arm tactics and sets his eyes on a village that serves as his primary resistance for a trap for the survivors of his attacks.

The Supreme King talks to Jaden from within his mind.

He commands an army of ruthless minions capable of decimating entire villages; with his most prominent underlings are called the The Duelists of Death, which consist of Guardian Baou, Chaos Sorcerer, Skilled White Magician, Skilled Dark Magician, the former two actually being Demise, King of Armageddon and Skull Knight.[9]

Jaden Yuki lost in the darkness 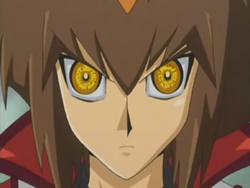 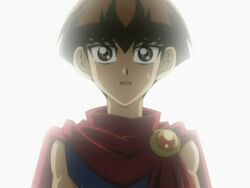 During the final Duel with Yubel, the true nature of The Supreme King is exposed: The Supreme King was once a resident (prince in the dub) of an unnamed kingdom, destined to battle The Light of Destruction, and a close friend to a once-human Yubel. Because of how young he was at the time, Yubel offered to be transformed into a Duel Monster to protect him, an act that moved the King to the point of devoting himself to loving his only friend. His spirit would later be dormant within Jaden, until it was awakened by Yubel's machinations. This realization gives Jaden the strength to forgive Yubel for what she's done, and to use "Super Polymerization" to fuse her within himself, reuniting Yubel and the King for all time. The flashback King looked almost exactly like Jaden (he just looked younger, he also lacked the demonic looking eyes he had when he has currently). It is stated that The Supreme King was later passed on to his reincarnation Jaden, but under the corruption of his own feelings of animosity and austerity, prior to having to have lost his trust and his friends.[1]

As Jaden activated "Spiritual Fusion", the spirit of the King appeared once more, but he looked like Jaden in his current age. He tells her that the true enemy is The Light of Destruction, and that she will be purified from its influence and her soul will be fused with his forever.[1]

Although the Supreme King makes no further appearances, he is shown in flashbacks during Jaden's Duel with Nightshroud[17] as well as in a flashback during the former's Duel with Yugi Muto and Yami Yugi.[18] Jaden possesses both the King's and Yubel's powers. He gains golden eyes more than once, before they turn to Yubel's bichromatic style, and manifests the power of generating wind during his second Duel with Sartorius.[19] During this Duel, Jaden tells Sartorius that there is no power which can control destiny. However, Sartorius counters by telling that he should know the allure of power more than anyone—having been controlled by The Supreme King. Jaden responds that such power no longer seduces him—and that power shouldn't be used to fulfill your own selfish desires, it should be used to serve a higher purpose.[19]

During the final Duel with Nightshroud, before her card was removed from play, Yubel reminded Jaden that he must believe in his own powers in order to win the Duel. Nightshroud tried to convince him that it's hopeless and he should surrender—he is alone, and no one else can fight. Jaden tells him he's wrong, stating that he's not the strong one. His soul was once drowned in darkness, and he hurt many of his friends—but that taught him something—to believe in the power of friendship and the strength of one's cards.[17]

The Supreme King plays an "Evil Hero" Deck, vile incarnations of Jaden's "Elemental Heroes". Like Jaden, The Supreme King's tactics revolve around Fusion Summoning, except he uses his own signature card, "Dark Fusion", a warped version of Jaden's traditional "Polymerization" that prevents the monster being destroyed by Spell and Trap Cards during the turn it was Summoned. The Supreme King also has access to "Super Polymerization", which can use monsters from both sides of the field as Fusion material and can't be negated by effects. It is able to bring out any kind of high-Level Fusion Monster with dreadful effects in an instant. Many of his "Evil Hero" versions of Jaden's "Elemental Heroes" possess stronger effects than their good counterparts.

Unlike Jaden, whose unorthodox plays depend on chance, The Supreme King is straightforward and his arsenal uses a variety of effects that range from card destruction to immunity from opposing card effects that effectively reflect the supremacy and omnipotence of a monarch. The Supreme King possesses alternate art versions of Elemental Heroes "Avian", "Burstinatrix", "Sparkman" and "Wildheart".