From Yugipedia
(Redirected from Thunder-Type)
Jump to: navigation, search
This article is about the Type. For other uses, see Thunder (disambiguation).

Thunder ( Ikazuchi) monsters are generally LIGHT Attribute, although there are WIND, EARTH or WATER Attribute minorities. Thunder monsters usually represent beings with electrical powers. Many Thunder card effects and support cards focus upon destroying the opponent's monsters by effect. They are used by Thunder Spark, Tyler Getz, and Flash Umiko in the anime and manga.

Some of the more notable ones include "The Creator", "Mist Wurm", "Hamon, Lord of Striking Thunder", "Zaborg the Thunder Monarch", "Thunder King Rai-Oh", "Some Summer Summoner" and "Denko Sekka".

"Thunder Dragon" is also a well-known Thunder monster, for its Deck-thinning abilities and for its Fusion Monster counterpart, "Twin-Headed Thunder Dragon". This card was later developed into a fully supported archetype, which focuses on effects that activate in the hand, banishing themselves, and using more Fusion Monsters.

Like Beast-Warriors, Thunder Gains advantages from the two field spell cards that Empowers the ATK/DEF of monster Types, which are "Mountain" and "Umi". 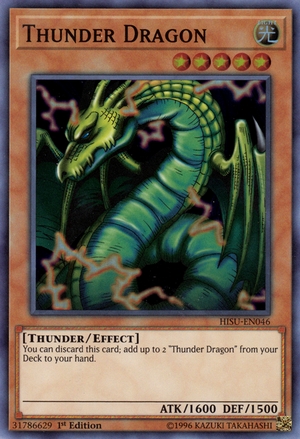