Thunder Spark is a Numbers Hunter that appears in the Yu-Gi-Oh! ZEXAL manga. He is working for Mr. Heartland in the Heartland Theme Park, disguised as an employee. There, he owns the Speed Field attraction. 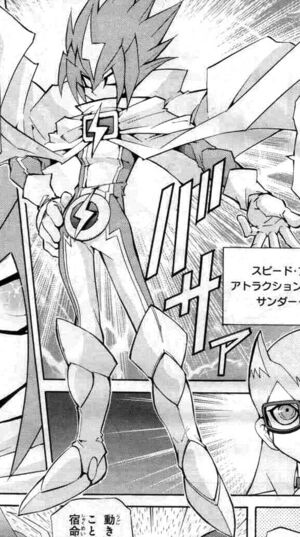 Thunder Spark has many elements on his design that resemble lightning bolts; for example, his hair and the thunder drawings in his clothes. He has big empty eyes, and curiously, seems not to have a mouth. He also wears a cloak and has armor-like boots.

Thunder Spark is a kind of artificial human created by Dr. Faker from electron drips.[1] Faker gave him a soul,[2] and made him work under Mr. Heartland.

When Thunder Spark touches someone, he electrifies them. This made him always unable to shake the hands of the children who visited the park, despite his will to do so.[1] 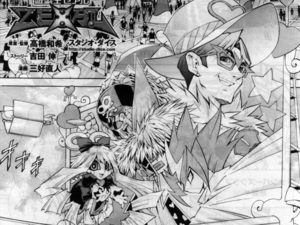 Spark with Captain Corn and Cologne.

Thunder Spark is first introduced together with Captain Corn and Cologne, as the Theme Park's "guardians of peace and justice".[3] He uses his riding attraction "Speed Field" to attract Numbers Holders, and then Duels them in a "Speed Duel" to obtain the "Numbers". 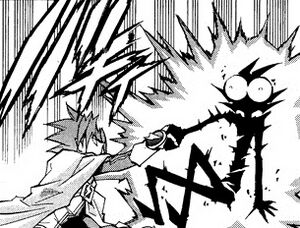 After Captain Corn's loss to Yuma Tsukumo, Mr. Heartland sends Spark to defeat him. Spark then challenges Yuma to a "Speed Duel".[4] Spark began overpowering Yuma with his "Number", but Yuma manages to win by using the "Number" he got from Captain Corn, "No. 50: Black Ship of Corn".

After Thunder Spark is defeated, Yuma thanks Astral, and they try to shake hands, but Astral's hand goes directly through Yuma's, and they just laugh on that. Yuma then goes to where Spark is, with Spark praising Yuma for the Duel. Spark explains that he was born from an electron, and was about to retake that shape, so he asks Yuma his last request - he wants to shake Yuma's hand. Yuma is suprised by how simple his request is an accepts, but gets electrocuted with Spark's touch. Spark explains that at Heartland, lots of children wnted to shake his hand, but he was never able to oblige them. Spark then starts to disappear, going back to his original form, as he says to himself "so this is human warmth...". Spark then vanishes, thanking Yuma and leaving his "Number" behind. Astral says that Thunder Spark must have been a lonely fellow Duelist, while Yuma takes his "Number", saying that he will take good care of it.[1] 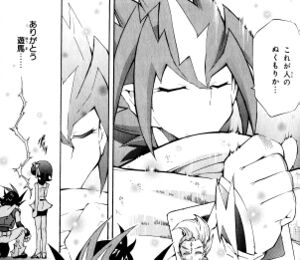 It is later revealed that when Dr. Faker "created" Captain Corn, Thunder Spark and Cologne, he gave them souls. However, if they failed at their tasks, their souls would leave them, making them return to their original form.[2] Apparently, this was what happened to Spark - when he lost to Yuma, he failed at his mission, becoming electrons again.

Thunder Spark runs a "hunder" Deck, spearheaded by his "No. 91: Thunder Spark Dragon". He uses many effects to swarm Level 4 monsters on his field in order to Xyz Summon the "Number", and uses cards like "Spirit Converter" to recycle its Xyz Materials and use its effect every turn.