Tilla Mook is the second Card Professor in Yu-Gi-Oh! R, and the first to be encountered inside the building.

Tilla's design follows a vampire theme, as she wears Gothic Victorian style clothing and uses a "Vampire" Deck. She has shoulder-length blonde hair restrained by a thick black hairband. Tilla wears a black leather corset over a black top with puffed shoulders and white ruffled cuffs, a black calf-length skirt over a white ruffled skirt, and black heeled calf-length boots. She carries a KaibaCorp Duel Disk on her left arm, but lends it to Katsuya Jonouchi after losing to Yugi. Jonouchi later gives her the Black Duel Disk.

Like the other Card Professors, she is named after a microchip, with "Tillamook" being a pre-release codename for the Embedded 266 MHz Intel Pentium MMX chip. It is in turn is named after Tillamook, Oregon.

Tilla was one of thirteen Card Professor mercenaries hired by Yako Tenma for Project R.A. She was to be Yugi's second opponent at KaibaCorp and was offered a cash reward if she could defeat him.[1]

She appeared before Dark Yugi, Jonouchi, and Honda in a desolate yard with Gothic-style fencing and withered trees, all created by Solid Vision. She claimed that she wanted to make the Duel field appropriate for her master who slept in her Deck. Dark Yugi smirked that he would make the barren her master's graveyard in that case. Tilla wagered the card key Yugi would need to enter the next block of KaibaCorp for the "Soul Prison" containing Anzu's soul, which Tilla would need to claim her cash reward. She then explained that the bounty on Dark Yugi was currently at $100,000 (US) and patronized Jonouchi, who was only worth $10.[1] 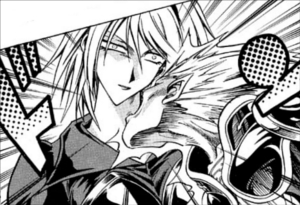 Tilla managed to Summon the card she considered her master, "Vampire's Curse". "Vampire's Curse" exhibited immortality by resurrecting itself when destroyed and would bite her on the neck to grow stronger when she paid his Life Point cost. She used "Evil Eye of Coercion" to force Dark Yugi's monsters to kneel before her master, allowing him to attack Dark Yugi directly. However Dark Yugi used "Bounce" to transfer its effect to his side of the field, forcing "Vampire's Curse" to bow to his "Buster Blader", allowing it to attack Tilla directly and win the Duel for Dark Yugi.[1]

After Tilla's loss, Jonouchi asked if he could borrow her Duel Disk, and she lent it to him.[2]

Jonouchi later gave her the Black Duel Disk instead of the one he borrowed. She didn't seem to mind as she smiled and held it above her head admiringly.