Toby Tredwell, known as Tobi Lola in the Japenese version, was the younger brother of Misty Tredwell. He possessed psychic powers similar to Akiza and Sayer.

On his elder sister, Misty's, birthday, Toby gave her a golden heart-shaped locket, with a picture of both of them inside.

Toby learned Akiza had also psychic powers like him and came to idolize her. He asked Akiza what he could do to be like her. Akiza replied that he should listen to Sayer, the leader of the Arcadia Movement. 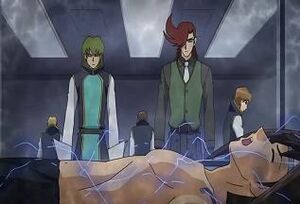 Sayer pushes Toby past his limits.

Having heard bad things about the Arcadia Movement, Misty disapproved of Toby getting involved with them.

Sayer took Toby for testing. Results said Toby's powers were weak, as he could barely withstand the procedure. Having little concern for someone he deemed weak, Sayer ordered the intensity of the procedure to be upped, not caring if it killed the boy. The intensity was increased and Toby was shocked, killing him in the process.

In the dub, however, Toby's death is only implied; instead of death references, people instead stated that he went missing and Sayer placed him with the other people who also had poor psychic abilities. When Misty asked where he was during her second Duel with Akiza, Sayer said that he was sent to a secret location, its coordinates ever changing, in which not even he knows.

Toby's dead body was left at the Daimon Area, where it was discovered, although difficult to recognize, days after his disappearance. It was believed that Toby had visited the area to watch the Black Rose Duel and got crushed by a chunk of a building that was damaged by the Witch Dueling.

People who heard of Toby's death unanimously agreed that it was the Black Rose's doing. Rex Goodwin, head of Sector Security worried about the secrets that Sayer, knew about him, so he only arranged a brief investigation consisting of a single police interview with the Arcadia Movement. No conclusive evidence was made.

The news of Toby's death caused Misty to drive carelessly, resulting in her accidentally driving off a cliff, hospitalizing her. As Misty was about to die, she was chosen by the Earthbound Immortals to be reborn as a Dark Signer. With her rebirth, Misty was set on getting revenge on the Black Rose to avenge her brother.

A year after his death, Misty Dueled the Black Rose, Akiza. During the Duel, Yusei Fudo tricked Sayer into speaking out loud about what really happened, using his Duel Disk's microphone.