Tokunosuke Hyori ( Hyōri Tokunosuke) is one of the main supporting characters appearing in Yu-Gi-Oh! ZEXAL. He is a friend of Yuma Tsukumo.

Tokunosuke realizes everyone has a hidden side.

When Tokunosuke got a new card - "Baby Tragon" - he wanted to show it to his brother. However, he overhears his mother talking about letting Tokunosuke do whatever he wants so that his brother can study in peace. This hurts Tokunosuke, so he goes to show some kids the new card he got, but he hears one of the kids talk about how he only hangs out with Tokunosuke just so he can get some cards from him and doesn't care about Tokunosuke at all. This causes Tokunosuke to believe that everyone has a hidden agenda.[1]

Tokunosuke is first seen defeating an unknown Duelist. Due to an agreement, the boy's Deck now belongs to Tokunosuke.

At school, Tokunosuke, who was hidden, watching Yuma, determines that he will be his next target, and he believes something fishy must have happened for Yuma to beat Shark. 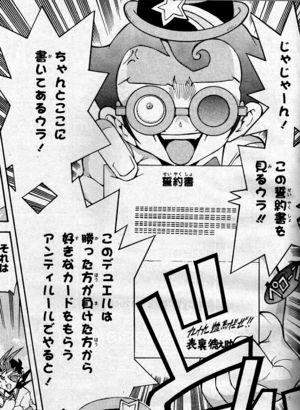 He later runs over to Yuma, asking him for his autograph. Yuma asks who he is, and Tokunosuke responds that he's in the neighboring class. In gratitude, Tokunosuke gives Yuma a "Baby Tragon" card and Yuma is ecstatic to receive his own Xyz Monster. Tokunosuke tells him that this is proof of their friendship. As Yuma leaps in the air in excitement, Tokunosuke calls him a fool inside his mind, as he doesn't realize everything has an opposite side. Tokunosuke asks how Yuma beat Shark without an Xyz Monster. Yuma says he has one, but it isn't technically his. Tokunosuke determines that that must be Yuma's trump.

After Yuma's lost to Kaito Tenjo, Tokunosuke, Tetsuo, Takashi, Cathy and Kotori form the Numbers Club in order to help Yuma.[3] Tokunosuke later comes up with the information that "Numbers" exist in the Heartland Theme Park, and Yuma, Astral, and the Number Club go to there.[4]

Despite all enemies they face, Tokunosuke seems to have fun at the park as if he was going there for fun.[4] He also seems to know all of the main characters from the park,[5][6] and when Mr. Heartland appeared, Tokunosuke asked him for his autograph, even after he revealed himself to be their enemies.[5]

Tokunosuke and the Numbers Club with their new outfits.

After their escape from the park, Yuma and the members of the Numbers Club gather in Cathy's house. Tetsuo asks Cathy what she wanted to show them. She then presses a cat paw-like button, which opens a door leading to a big room, with many researchers and big computers. Cathy explains that as an apology for the trouble she caused, the Numbers Club's headquarters would be established there, where they can look up mysterious phenomenons happening throughout the world, and therefore, locate the "Numbers".[7] The Numbers Club then start helping Yuma, wearing new super hero-like outfits.[8]

Tokunosuke uses a Deck focused on shifting control of the opponent's monsters to himself, taking advantage of the "Baby Tragon" card he gives to his opponents.